Warning: This post contains spoilers from Tuesday’s episode of FBI, titled “Uncovered.” Read at your own risk!

Long-term romances don’t fare well on FBI, so it comes as no surprise that another relationship has crashed and burned in the CBS procedural. This time, it’s Special Agent Maggie Bell (Missy Peregrym) and Special Agent Nestor Vertiz (Josh Segarra) who saw their budding romance come to a bittersweet end.

The episode, titled “Uncovered,” found Maggie ending their relationship — which began while they were working together undercover — after the headstrong agent overstepped his boundaries and again neglected to relay some every important information. Remember that time Maggie found out he had two kids by scrolling through his phone? Nestor outdid himself this week when he asked Maggie to move in with him, telling her that he’d begun searching for apartments for them to live in together despite hitting numerous roadblocks in their relationship thus far. 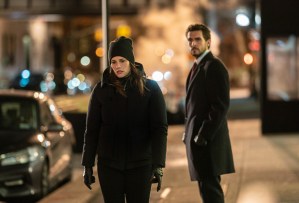 Maggie, who was completely thrown off by this proposal, asked for some time to think it through. Nestor dug a deeper hole for himself by making reckless decisions throughout the hour that forced Maggie to question his character. The last straw came when Nestor revealed that he’d already purchased the apartment without Maggie ever seeing it, causing the latter to break things off for good.

We’re pretty sure OA (Zeeko Zaki), who often clashed with Nestor this season, will be the first one celebrating the breakup. Nestor, a lead hostage negotiator in charge of the Gang Unit, was called in to work several of Maggie and OA’s cases and his aggressive approach to the job rubbed OA the wrong way. Though OA tried to like Nestor for Maggie’s sake, he couldn’t get past their work-related issues and the many confrontations that resulted from Nestor’s abrasive attitude.

How do you feel about Maggie and Nestor’s relationship ending the way it did? Let us know your thoughts in the comments below!