The CW’s next Greg Berlanti-produced series is a family drama in the vein of classics like Everwood and Friday Night Lights — only this one happens to have Superman in it.

Scroll down for a few highlights from the panel:

* Helbing says his earliest conversations with Berlanti revolved around one question: “How do we make Superman, in general, different?” In addition to focusing on Lois and Clark’s role as parents, Helbing says, “We approached this as much as we could like a feature, from the aspect ratio to the cinematography.” Fully aware of the big-budget streaming services and cable networks competing for viewers’ attention, he says, “We wanted to be able to offer the audience something of equal quality.”

* Lois may not be living in Metropolis anymore, but don’t think for a second that she left her reporter hat behind. “A lot of what she’s writing about is what capitalism is doing to these small towns, Smallville in particular,” Tulloch says. “Superman is doing his stuff with his superpowers, and she’s fighting against these injustices with words.” The fact that “the profession of journalism has been under siege for the last few years” makes Lois’ work feel “especially important and timely,” Tulloch adds. 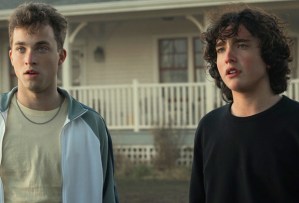 * While many TV teens come across as moody cliches, Garfin says that Superman & Lois takes a “mature” approach to its younger set, adding, “I was so happy to see intelligence written into the characters.” Some of that comes through in Jordan and Jonathan Kent’s relationship as brothers. “We get into fights, and we can hate each other sometimes, but it’s built on a very deep and wide foundation of love.” This bond will prove particularly important as the boys begin to discover what they may (or may not) have inherited from their father.

* Despite Clark and Lana’s long (and somewhat complicated) history, don’t expect a full-on love triangle with Lois. “Yes, they dated in high school, but besides that they’ve known each other since kindergarten,” Chriqui says. “Lana certainly treats Clark as one of her closest friends, one of the people who knows her the best. There’s a lot of history there, but in this incarnation of the world, it’s not just based on their romance. It’s a very rich, long history.”

* Visually speaking, Chriqui says she was never asked to dye her hair. In fact, the only people who have asked about Chriqui about recreating Lana’s lighter locks from the comics have been the fans. (Shocker!)

* Another new character fans will get to know is Chrissy, a reporter at the Smallville Gazette. “She’s obviously, clearly inspired by her idol, Lois Lane,” Hasmik explains. “She wants to make her proud and wants to make herself proud. It’s a good reminder of what chance encounters can lead to.” (Tulloch counters this by asking, “Chance encounters or stalking?” to which Hasmik replies, “A smidge of both!”) 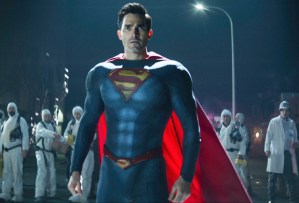 * And then there’s the million-dollar question: What’s the deal with Parks’ mysterious villain, known simply as The Stranger? Without giving too much away, Parks says, “We’ve seen this character a lot before, but the difference between this one and the other ones is his backstory. … I’m a comic nerd, but as far as I’m aware, we’ve never covered this kind of stuff on TV before. He’s not just a bad guy for bad guy’s sake. There’s a reason why he’s doing these things. Every bad guy is the hero of his own story.”

* One thing Parks can confirm is that he isn’t physically the person wearing his character’s costume. “We did attempt to put me in the suit at one time, but it didn’t go well,” he admits, explaining that his stunt double is much closer to Hoechlin’s height.

Superman & Lois lands Tuesday, Feb. 23 at 8/7c on The CW with a special two-hour premiere event. TNT will air an encore on Saturday, Feb. 27 at 9 pm. Will you be watching? Drop a comment with your thoughts on the Arrowverse’s newest recruit below.