Nine minutes. That’s about how long the wait time is for Queen Latifah to start beating down bad guys in CBS’ reboot of The Equalizer. And boy, is it worth the wait.

The pilot episode premiered Sunday following the Super Bowl, and stars Latifah as Robyn McCall, a newly retired CIA operative who is trying to settle into a quiet life of motherhood and school drop-offs. She almost gets her wish until an old handler and mentor named Bishop (Chris Noth) asks to meet up at the Coney Island Wonder Wheel to talk about what turns out to be her surreptitious resignation. 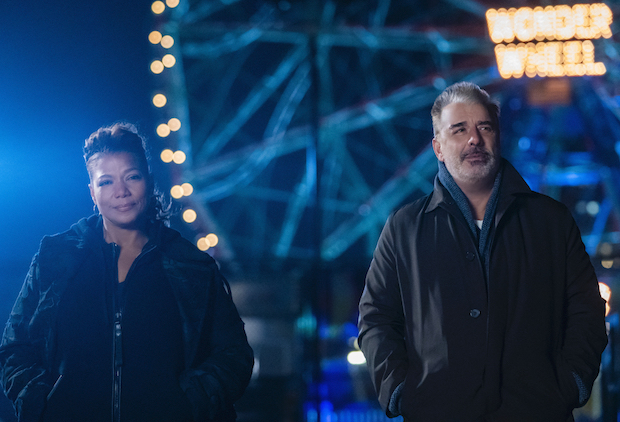 The last mission broke her, Robyn says at their clandestine nighttime meeting, despite Bishop’s message from “The Company” that she can still come back. Bishop even says Robyn can come and work for him, at his private security firm. “When I can’t sleep at night, it’s not the things that I’ve done that keep me up,” a determined Robyn says as she turns down all of Bishop’s offers. “It’s the people I couldn’t save.” And with that, Robyn stays behind to stare into the darkness and ponder about her choices after Bishop leaves.

It’s a good thing she does, too, because that’s when Robyn spots a young woman and a shady-looking dude squeeze through a chain link fence to sneak into the amusement park. Robyn, the mother of a teenage girl around the same age, worries about the underage stranger and follows the two. (As viewers previously learned, the girl, whose name is Jewel, witnessed a murder that she has now been framed for and is meeting with some underworld types to buy a fake ID and passport so she can go on the lam.)

Robyn knows none of this yet but her Spidey senses are still telling her to check things out just in case. See, underworld types don’t play by the rules, and instead of selling the girl the fake documents, the baddie takes her money and decides he and his three friends will rape her first. That is, until Robyn shows up and spoils their sick plan.

Straight out of Central Casting, the Russian-accented head goon tells Robyn to mind her own business. “I’ll tell you, I’ve tried,” Robyn says, inching closer to the goon and channeling her inner Liam Neeson, lowered voice, narrowed eyes and all. “But it turns out, I’m really bad at it. But there are other things I’m real good at. So, why don’t you let that girl go, and I’ll let you walk out of here.”

The goon and his slimy pals laugh at Robyn’s words and pull out their guns — but before they can pull triggers, she disarms the head goon and shoots the others with his gun. Two of them stand up to fight her with a hammer and a wrench, but she beats them up with their own tools to the beat of a fast-tempo rap song. (This is especially cool because Latifah recently told reporters that the musician in her fights villains on the show to a song in her head, and she knows she has to knock them out by the time the hook drops.)

As fans of the original 1980s The Equalizer will tell you, Edward Woodward was a cool old dude, but he couldn’t fight to a drum beat. Utilizing what looks like a fighting style called Wing Chun, Latifah proves she doesn’t have to be muscle-bound to obliterate thugs. She also doesn’t have to be Denzel Washington in the movie versions of The Equalizer.  Or a man at all. Latifah, who clearly knows how to fight, just has to be faster and more skilled than the other guys. 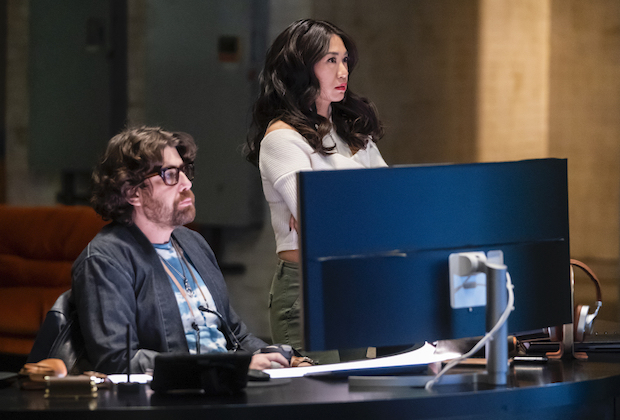 The beatdown also allows Robyn to realize her life’s mission and the purpose of the show — to save people in need who can’t turn to the police. Although there is one cop that is better than the rest (played by actor Tory Kittles), Robyn knows she has to prove Jewel’s innocence first. To keep tensions high on the action drama, Robyn also has to save Jewel more than once and rely on her savvy sidekicks (played by Liza Lapira and Adam Goldberg) from her CIA days. Bishop even lends an assist, but not before another set of villainous thugs douse Robyn’s hair while waterboarding her. Throwing water on a Black woman’s head? Oh, you’re going to die.

Because, make no mistake about it, Robyn is a Black woman in an America with its first Black and South Asian Vice President and a Black woman named Stacey Abrams who helped turn Georgia blue. A Black woman can also equalize all kinds of criminals, play darts and lean on her aunt (played by the incomparable Lorraine Toussaint) to help her raise her unruly daughter. We can’t wait for the PTO to get a load of this mother.