During his socially distanced tour of Studio 8H, first-time host Dan Levy was “surprised” to find his dad, fellow Emmy winner Eugene Levy, in attendance for the big show.

“I flew in to wish you luck tonight,” Eugene said. “But because I traveled, I’m in this isolation box,” guarded by two COVID compliance officers in head-to-toe personal protective equipment.

“I didn’t know about the box at the time,” he told his son. “I found out when I landed.”

The bit came at the end of Levy’s humble host monologue, where he remarked on a life-altering year.

“The past 12 months have quite literally changed my life in so many ways — both good and not-so-good,” he said. “The good: I have been getting stopped on the street by all different kinds of people, which is new and fun and different. The not-so-good: Those people are mainly screaming ‘Ew!’ at me, which is a line I wrote for the show that will now haunt me for the rest of my life.

“But in all seriousness, for all the good and the not-so-good, I have somehow found myself here, on this iconic stage, standing in front of all of you — and trust me when I say this: It has only been good here at SNL,” he said. “It’s as if nothing has changed. Everyone still has that charming, funny sparkle in their eye, they’re just a little bit safer.”

What followed was a backstage tour that showed that nothing is quite like what it was in the #beforetimes. Case in point: the new cast decontamination station, where Melissa Villaseñor was getting sprayed down with disinfectant ahead of her first sketch. 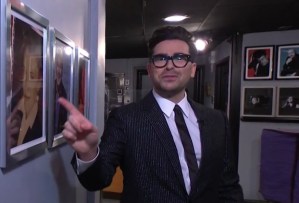 On his way back out, Levy walked past a hallway lined with host portraits. Among them, he pointed out, was none other than TV mom Catherine O’Hara, who hosted SNL twice, in 1991 and 1992.

What did you think of Dan Levy’s SNL monologue? Hit the comments with your reactions, and grade the episode below.