Warning: The following contains spoilers for the finale of Firefly Lane. If you’ve yet to finish your binge, you might want to put off reading this recap until you have.

Is a finale still a finale if there’s not actually anything final about it? That was the question we were left asking after watching Episode 10 of Netflix’s Firefly Lane. Not only did it leave Johnny’s fate unresolved and Sean’s future uncertain, it revealed that Tully and Kate hadn’t remained Firefly Lane girls forever. But why?!? We were never told! But if you read on, I’ll fill in as many of the blanks as did “Auld Lang Syne.” 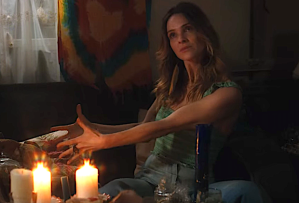 1974 | In the furthest-back of our three eras, as Christmas rolled around, Kate’s dad Bud seemed to be getting wise to wife Margie’s infidelity. “You get what you need?” he asked rather pointedly when she returned from the longest grocery run in history with flushed cheeks and a guilty conscience. Across the street, Cloud was forced to reveal to Tully that she’d given their regular allowance from Gran to Leon before they’d broken up. What were they supposed to do for food, then? “There’s bread,” said the Mother of the Year. “Make toast!” Even if she hadn’t been high as a kite, she wouldn’t have been worried. Leon had left behind a stash of drugs; as soon as she sold it, they’d be rolling in green. And not the kind that she was so fond of smoking, either. Well, not only that kind, anyway.

While trimming the tree at the Mularkeys’, Cloud did what she does best and made a scene, first by mentioning that she’d seen Margie in town with some guy, then by pointing out that the factory at which Bud worked made more than the Mars Rover, it also made bombs that were then dropped on villages in Vietnam. Erm, “who wants a Christmas cookie?” asked Margie. After Bud’s blood pressure came back down, at least a little, he privately informed his wife that she’d have to make a choice. “OK,” Margie replied. And since we know she was still with him years later, she obviously picked him over “Bruce from church.” But that wasn’t the end of the drama on Firefly Lane. Shortly, Cloud was busted for dealing drugs, and to Tully and Kate’s mutual horror, the former was sent to live with her Gran.

1980S | In our middle era, Kate and Johnny’s chemistry was on full display at KPOC — to the point that only Kate didn’t notice it at a Carol Tries It meeting. Afterwards, she insisted to Tully that she and her crush had agreed to just be friends. But apparently, her breasts hadn’t gotten the memo. “I’ve never actually seen a bosom heaving in real life,” cracked Tully. If Kate was still into their boss, would she be going to the office Christmas party with a blind date who was said to be a megahunk? In fact, she might, suggested Tully — to make Johnny jealous. Mind you, they never made it to the bash. As Kate’s date arrived to pick her up, she received a call that her father had had a heart attack. “So, uh, rain check?” said the megahunk. After Bud had been declared out of the woods and Johnny had driven Kate home, the Aussie revealed that Margie had asked him to stay overnight in Sean’s room so that her daughter wouldn’t be all alone. Was that opportunity that we heard knocking? 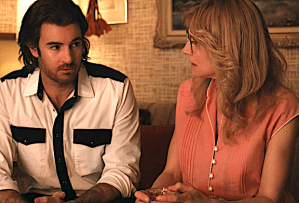 In fact, it was. At last, Kate planted a kiss on Johnny… from which he pulled away. Finally, they dispensed with their long list of his and hers misunderstandings. But since he still didn’t want to mess up their friendship, they went to bed separately. At least briefly. Before long, she was getting up to go to his room, only to find him at her door. To hell with their friendship, he joked. “I’ve got other friends. Plus, I’m in love with you.” So they consummated their eons-long flirtation. In other developments, when Tully visited Wilson’s office to sign her KLET contract, the creep made pass after pass at her until she finally had to knee him in the groin. Good luck, he spat as she left. “Your only talent was getting shot.” Ah, if only that had been the last she — or we — saw of him…

2003 | In our final era, as Marah and Emma worked on a school project upstairs with goth pal Josh, Kate and Travis canoodled downstairs. That is, they did until she removed her tongue from his mouth long enough to moan, “Oh, Johnny.” Oops. When she subsequently reported her disastrous gaffe to Tully, her pal advised her to invite Travis over again, then greet him at the door naked. As for Tully’s predicament, Kate suggested that she simply apologize to Max. And it appeared that she was going to do just that when she arrived home to find her husband there. But she choked the words back down when he shared that he’d learned that they could get an annulment that very week. Heartbroken, she went over to Kate’s and crawled into bed with her bestie. Wait a day, Kate said, then ask Max to meet at the gazebo in the park where the wedding had taken place. Wasn’t that from a movie? “It’s from every movie,” Kate admitted, because it’s just. That. Romantic. 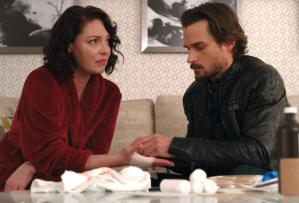 The following day, Kate left a series of rambling messages for Travis, one of which included a colorful description of their make-out sessions… and was heard by Marah, Emma and Josh, who remarked to his mortified friend, “Dude, your mom is buck wild.” At The Girlfriend Hour, Wilson apologized to Tully for his past behavior. But the misogynist pig hadn’t really changed at all. Soon, he’d foisted on her Brooks, an obnoxious male guest to interview in hopes of attracting a bigger audience of guys. “Men,” he insisted, “mean bigger ad dollars.” Uh, since when? Afterwards, she was so furious that she punched her dressing-room mirror… which gave her the perfect excuse to call EMT Max. “All I do,” he noted, “is chase you.” So he wasn’t sure that he wanted to take the second chance that she was offering. Well, she’d be at the gazebo the following day if he decided that he did want an “I do”-over.

That evening, Kate, apparently unfamiliar with the concept of a peephole, answered her door naked. “Care to come in for some hot nog?” she asked Travis… who it turned out had brought his mother along. Once Mom excused herself, Travis assured Kate that she didn’t have to try so hard. They could take their time and figure out what they were to one another. Later, though, it wasn’t Travis who was on her mind but Johnny. Just as in the ’80s, she ran to the door to go to him, only to find him already on the other side. Also just as in the ’80s, they had sex. The following morning, after she dropped him at the airport, she admitted to Tully, “I think I’m still in love with him.” Tully’s — and the only possible — response: “Duh.” At The Girlfriend Hour, Wilson reported that the network had loved Tully’s interplay with Brooks, so he was being made her new co-host. Of my show? exclaimed Tully. “Actually, it’s my show,” Wilson reminded her. He could have it, then; she quit. 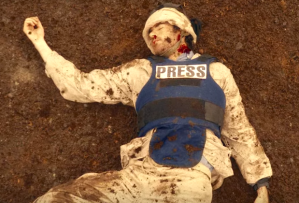 When Tully arrived at the gazebo for her date with destiny, Max was a no-show. But of course Kate was there, you know, just in case. Back at Kate’s mansion, the pals were comforting one another when Sean showed up to join them in the world’s largest chair. He’d just come out to Julia, he said. And she’d immediately shown him the door. As the episode and the season drew to a conclusion, we got a glimpse of Johnny’s experience in Iraq — and saw him step perilously close to a landmine. Was he dead? Alive? Couldn’t say. On New Year’s Eve, Kate and Tully toasted to 2004, the year in which the latter was going to make her comeback, she said, with the help of her new producer: Kate, natch. But something must have gone very wrong with that plan, because when we returned to the funeral we’ve been circling for episodes — it turned out to be Bud’s, by the way — the besties seemed to have put the E-N-D in friends. “No one wants you here,” Kate told Tully, who felt as if she’d been punished enough for some undisclosed transgression. “When I said I could never forgive you for what you did, what did you think that meant?”

Obviously, the show can’t end-end here, right? There will have to be a Season 2. If there is, will you watch? On your way to the comments, stop off at the poll below to grade the finale and Season 1 as a whole.