In WandaVision, S.W.O.R.D.’s efforts to decipher exactly what Wanda is doing to the town of Westview require outside help from unlikely sources, like Randall Park’s Jimmy Woo. First introduced as the naïve FBI agent in Ant-Man and the Wasp who is easily and continually outsmarted by Scott Lang (played by Paul Rudd), the agent we meet in the Disney+ series is slightly different. He’s more mature, he’s learned Lang’s once-baffling card trick — and, according to Park, he has become far more effective in his role.

“I think he’s gotten better at his job,” Park tells TVLine. “He’s gotten more confident. I think he’s held on to a lot of things that make him Jimmy. He’s still sincere and earnest and maybe a little bit vulnerable at times, and he really wants to connect to people, and he loves magic. Those things stuck. But as far as his job is concerned, he’s definitely risen through the ranks, and obviously, he’s on this big case, [so] he’s grown.”

Jimmy’s new mission puts him in the path of Darcy, who we last saw in Thor: The Dark World helping Thor (Chris Hemsworth) and Jane Foster (Natalie Portman) defeat the dark elves. Like Jimmy, she’s grown since her last MCU appearance, earning her doctorate in astrophysics — a deviation from her original political science major — and remaining confident as ever (like when she checked that S.W.O.R.D. agent for referring to her as “Miss”). Darcy and Jimmy hit it off instantaneously in last week’s episode “We Interrupt This Program,” which Park attributes to their similarly quirky status. 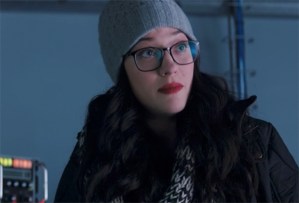 “They both have a lot of respect for each other because… in a way, they’re oddballs. Despite being these interesting characters as people, they’re also really good at what they do, and because of that, they work well together. And the fact that they’re kind of opposites in a way, they complement each other,” Park explains. “And I think they really appreciate that about each other, so it’s fun to watch them in action because they are so different, but they are, at the same time, in sync.”

With Monica Rambeau (Teyonah Parris) officially back in action after being yeeted from Wanda’s sitcom world, that dynamic duo has now become a very entertaining — and brilliant — trio. In this week’s “On a Very Special Episode…,” the gang found themselves working together to try and figure out this confusing Wanda situation. Darcy dubs the anomaly as the Hex, while Monica determines that Wanda is altering reality and thus is more powerful than ever.

Now that the reality-manipulating Avenger is capable of pretty much anything — MAJOR SPOILER ALERT: She resurrected Vision and may have also done the same with her brother Pietro, who appears in this week’s episode but recast with Evan Peters (Aaron Taylor-Johnson played Quicksilver in Avengers: Age of Ultron) — this trio will have their hands full in trying to stop her.

Whether or not this venture calls for Jimmy to channel his inner action hero remains to be seen, but Park has two words for fans anticipating what’s next: “Keep watching.”