The following contains spoilers from The Expanse‘s Season 5 finale.

The Expanse‘s penultimate season finale this week served up rousing action, elaborate space battles, and the whiz-bang, Technicolor whatever-the-heck-that-was in its very final moments. Yet it was a quiet, almost ASMR-like sequence involving Naomi, after she floated herself away from the boooby-trapped Chetzemoka, that had viewers gasping along with the untethered Belter.

Things indeed looked plenty dire for Naomi, played by recent TVLine Performer of the Week mention Dominique Tipper. But thanks to her “Hail Mary” use of Belter hand signals whilst floating aimlessly, after catching the Razorback‘s attention she was able to alert Alex and Bobbie to the fact that the Chetzemoka was to be steered clear of at all costs. Not long after, just when you had to think Naomi had fought her last fight, we heard a muffled voice, and the sound of an oxygen tap. Bobbie had floated out to save her.

TVLine hopped on a Zoom with Daniel Abraham, series EP and co-author of the novels on which the Syfy-turned-Amazon Prime series is based, to get his unique perspective on Naomi’s nail-biting float and the “brilliant” way it was directed. Plus, did [Spoiler] possibly survive that final scene?! 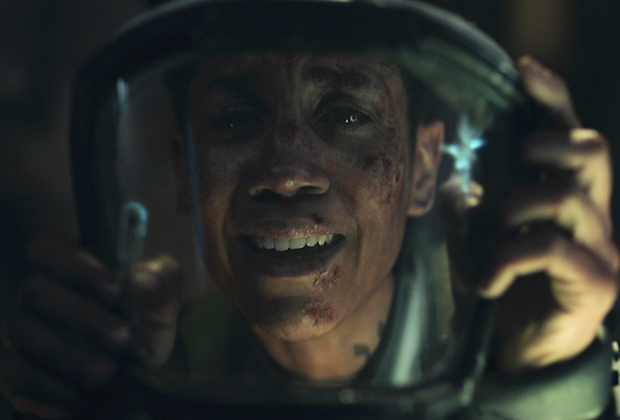 TVLINE | What was it like to see such a seminal series of events be brought to life in the finale? Or is it almost “old hat” for you at this point?
It’s weird because my experience as a viewer of the show is so influenced and informed by all the times I’ve spent putting “2x4s under it” and negotiating, like, “Should it be three feet to the left…?” It’s easy for me to get caught up in the minutia and the technical stuff, but every now and again, as I am still in my “editor’s brain” looking at it, you hit a scene that just pops and you’re pulled into the story again. When Naomi jumps out of the Chetzemoka that last time? All I’m doing is watching. Then I’m just watching the show. When they get around to her “If something goes wrong…” message? Yeah, then I’m just watching. When things like that happen, I can’t maintain my creative distance.

TVLINE | What other moments from the finale were especially visceral to see on-screen? The space battle was pretty intricate for the show.
That was a great space battle. Admittedly, battles are not my personal strong suit; this is why we have a team. [Expanse co-author] Ty [Franck], [showrunner] Naran [Shankar] and [director] Breck [Eisner] are the ones who put that together the way that it is, and I get to just marvel at it. But the battle scene is great, the emotional catharsis when Drummer identifies herself to the Roci… There are a lot of good bits in this one.

TVLINE | Going back to Naomi’s float, that character had an incredible journey this season.
Yeah. We managed to do a lot of the stuff from the books in the Naomi arc this year. There were some differences because we had to lose a bit of “The adventures of Alex and Bobbie” along the way. There were some differences in staging how that rescue went, but that’s just the game. You can’t actually use a book as a shooting script.

TVLINE | What did you think of how Breck approached that scene as director, with the fixed extreme close-up?
I think he’s brilliant. I think he found a way to make that moment unexpected, and rich, and exciting, in a way that would absolutely not have occured to me. One of the real joys of the process is getting to have all of these other incredibly talented, experienced, thoughtful artists come in and say, “You know what would be cool is if we did it like this.” Yeah, that would be cool!

TVLINE | I mean, even if you knew that Naomi wasn’t a goner, you had to think she was.
The whole arc of the second half of this season has been about intensely small personal stories in the context of a war, and I don’t think that at any point we have had something that was more absolutely intimate and absolutely focused and absolutely small and epic than that scene.

TVLINE | I’m curious what the filming of that scene looked like, there on set. Was Dominique Tipper suspended by wires, was she standing on a floor before a green screen…?
I saw dailies that didn’t have any of the effects in, and she was in front of a green screen, and actually the visor in her helmet isn’t there. That is a CGI visor, so all of the condensation and the spit, the way that when the oxygen comes in and it starts to clear it all up, all of that is done by the VFX team. …The amount of storytelling that happens in post-production was something I did not understand before I started with this team.

TVLINE | It’s funny how differently we look at clear visors now, amid the pandemic.
Yeah! Our emotional reaction to them, our relationship, has changed.

TVLINE | You must be excited to finally say the D-word, as in Admiral Duarte.
We’ve typed the D-word before. It has shown up on screens and in hints until now, but yes, I am looking forward to that playing out.

TVLINE | Would you call him one of the more, or most, threatening figures we will have met during the series?
Duarte is…. [Thinks for a moment] Duarte is a “competent idealist,” and that is a terrible thing to have. [Laughs] 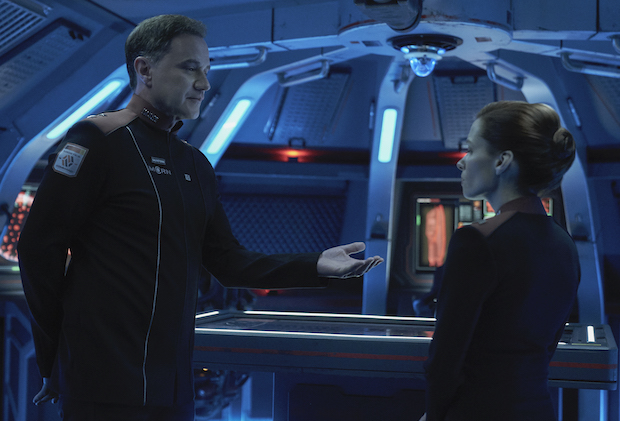 TVLINE | I used to interview Tim DeKay a bunch during his White Collar days. Given what happened to the Barkeith there in the final scene, I have to fear we have seen the last of him.
Uhhh, yes. [Laughs] I think the Barkeith is no more. We’ll probably get the details on [what exactly happened to] it later on, but it’s safe to say that was not a good thing that happened.

TVLINE | That was another interestingly directed scene, how the action just froze, before….
There’s a technical issue about filming things that happen very fast. When people are going through that Ring, it’s not a long process, so we have to find ways to slow things down enough that we, as the audience, can make any sense of it.

Want more scoop on The Expanse, or for any other show? Email InsideLine@tvline.com and your question may be answered via Matt’s Inside Line.