Warning: The following contains spoilers from Thursday’s grown-ish. Read at your own risk.

Aaron has taken on his fair share of social causes — from the lack of Black professors at grown-ish‘s fictional Cal U to keeping Hawkins Hall a safe space for Black students. But as fans saw on this Thursday’s installment, titled “Alright,” Aaron’s (Trevor Jackson) ongoing fight against the university’s investment in private prisons became more impactful when he teamed up with Zoey (Yara Shahidi). Together, the two devised a plan to have student protestors don orange prison jumpsuits to quietly but effectively get their message across — and it worked.

It’s a story arc that began in last week’s episode when campus security, contracted out by the same company that owns the prison, arrested Aaron for posting too many flyers demanding the university’s divestment. The arrest caught national attention, propelling Aaron into the spotlight with an interview on guest star Angela Rye’s TV talk show. Although Aaron fumbled through his messaging on television, advice from Javi (Henri Esteve) afterward helped him find his way.

The plotline also helped grown-ish intently tackle both the prison industrial complex and the over-policing of Black and brown people, says Shahidi, who is also an EP on the show. Season 3B wrapped months before George Floyd’s murder at the hands of the police last May, but as Shahidi points out, the need for the Blacks Lives Matter movement is sadly ever prescient.

“Everyone was worried that there was going to be this huge gap of time in which so much had happened in the world before we were back on TV,” Shahidi tells TVLine. “We were talking about things that were happening in 2019. But kudos to the writers, who have really prided themselves on trying to stay true to what’s happening on campuses.” 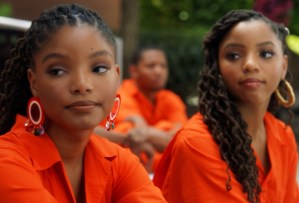 A secondary story within the episode also addressed activism among student and professional athletes, when Jazz and Sky (real-life sisters Chloe and Halle Bailey) initially refused to take a stand because they were afraid it could cost them their track scholarships. But ultimately, they too decided to take part in the protest.

“I think it’s such an important topic to talk about for Black youth,” says Halle Bailey, who plays Sky. “I mean, sometimes we feel this pressure to be a certain way, especially when we get somewhere on scholarship. We feel like we need to be extra clean and not say anything that’s going to make anyone upset. But I think it was really important for Jazz and Sky, and they’re learning how to really speak up for what matters to them and speak up for their community. And realize that in the midst of everything going on, that is the most important, and they shouldn’t be scared. I was proud of them because they were not going to sugarcoat stuff.”

As far as platforms go, grown-ish producers and writers understand its responsibility, but will only take on topics organically, Shahidi says.

“We know, of course, we will never capture everyone’s whole college experience, but many times when I walk into the writers’ room, we’re just so aligned,” she says. “Whether it be the question of prison investment and divesting in systems of so-called criminal justice that has not served our communities, that was a conversation we had. And it was something that was important that I was experiencing on campus as well as something that is just important from the writers’ perspective. Then when we realized we weren’t going to air until January of this year, I re-watched the season and was really warmly surprised.

“It is a double-edged kind of feeling,” Shahidi adds, “of being both sad that it’s still so relevant, but also excited that when we pick up, we get to have conversations that are in fact in touch with what’s happening.”