Crash-landing on a foreign planet must be incredibly difficult for an extraterrestrial to handle, but Resident Alien‘s resident alien isn’t the only one dealing with some massive baggage.

While Harry continued learning how to pass as human by studying Anne Hathaway photos and brushing his face instead of his teeth (he’s a work in progress, that one), it was nurse Asta Twelvetrees (Sara Tomko) who showed her vulnerable side on Wednesday’s episode. As she continued to mourn the late Dr. Sam Hodges, she revealed the truth behind her relationship with her dad, Dan, allowing Harry the chance to further explore his newfound empathy, as unnatural as it may seem to him. (Though it sure looks like he has a better grasp of human emotion than dental hygiene.)

While Asta was ultimately adopted by her dad as a child, it was Hodges who was “like a father to Asta,” Tomko tells TVLine. Yet still, the love she experienced from Hodges and her community couldn’t prevent feelings of loneliness from creeping in, which led her down a questionable path of bad decisions and even worse men.

“She feels mostly isolated and doesn’t quite know where she fits in,” says Tomko. “It’s very internal, a lot of insecurities and vulnerabilities. We see her stumbling out of this abusive relationship, and then this weird guy comes in the day after she discovered her father figure and friend dead. That is so deep. And [Harry] just comes in and is like, ‘This is awesome!’ It is so offensive! There are so many reasons for her to hate Harry, and yet he has something that she’s never experienced before with any man, and that’s this ability to be brutally honest.” 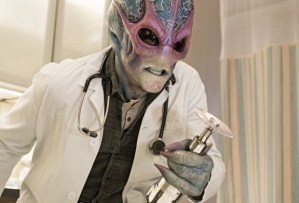 Despite the fact that she should run away screaming from Harry, the two forge an early friendship in the series’ first couple episodes, bonding over their mutual feelings of isolation.

“There’s a familiarity she has with him. He looks and acts like an outsider, and that’s a mirror reflection of how Asta feels,” says Tomko. “It’s a beautiful, relatable theme that a lot of people will be able to appreciate and respect… that feeling of ‘even when I’m surrounded by so much love, I feel like I don’t fit in.’ And then finding someone you feel like you fit in with? That’s a pretty incredible feeling.”

Adds creator and EP Chris Sheridan: “Even though Asta was raised in a reservation, she feels a bit like an outsider. And she has other issues she’s been going through, with a baby she had to put up for adoption when she was 16, and her horrible abusive marriage. Through all the hard times, she always had Sam to talk to. Without him there anymore, she’s going to have to face these things head-on.”

Unfortunately for Asta, things aren’t about to lighten up anytime soon. Tomko teases that Asta will have yet another bump in the road come Episode 5, but until then, viewers can continue snacking on Harry’s journey, as he explores “the inner workings of how to feel these new feelings he’s never felt before.” As for the rest of Asta’s Season 1 arc, it’s bound to get even messier.

“There is some clarity and closure for Asta in some of her storyline and relationships, but not much, so it’s a little messy from beginning to end,” notes the actress. “But I will say there’s a light at the end of her tunnel. She’s so good at standing up for others, but you start to see her really learn how to stand up for herself.”

Any early theories on who killed Sam, and what do you think about Asta and Harry’s budding friendship? Drop your thoughts in the Comments!