With Wednesday’s release of Netflix’s Firefly Lane, we got to know future BFFs Tully Hart and Kate Mularkey — played as adults by Katherine Heigl and Sarah Chalke, respectively — just as they got to know one another. The former was portrayed as always having been gorgeous and outgoing, a star waiting to be born; the latter, bookish and reserved (as telegraphed by her ever-present glasses — TV shorthand for mousy). Yet they forged a relationship that lasted decades, at least until… dun dun DUN!

We’ll get to “dun dun DUN” in a bit — and give you a chance to weigh in on whether you were as pleased to make the gal pals’ acquaintance as they were to make each other’s. First, though, let’s review what the premiere revealed to us about the evolution of their friendship, shall we?

THAT WAS THEN… | For the sake of a linear and easy-to-follow recap, rather than skip back and forth through the decades like the series, I’m going to break “Hello Yellow Brick Road” into the eras in which we spend time with Tully and Kate. First stop: the 1970s. The duo met when Tully (Ali Skovbye) was moved to the titular avenue by her mother, drugged-out hippie Cloud (Beau Garrett). For Kate (Roan Curtis), it was (platonic) love at first sight; at a glance, she could tell that her new neighbor was as confident as she was beautiful. Tully, on the other hand, was less keen on the bespectacled girl that her mom said looked like she’d just stepped out of an encyclopedia. But that was just a defense mechanism; Tully was embarrassed by Cloud and the squalor in which they lived. Soon enough, she came to appreciate Kate’s innate kindness, even if Miss Popularity did still blow her off to flirt up the first cute boy that came along. Foreshadowing, anyone? 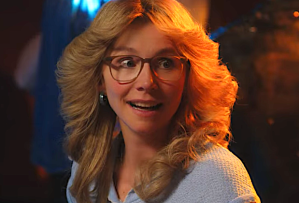 OK, THIS WAS THEN, TOO, JUST A DIFFERENT THEN | By the ’80s, Tully (now Heigl) was working toward becoming a TV anchor. That is, she was slowly working toward that goal, toiling away doing grunt work at dead-end station KPOC. But she was at least well-liked enough by boss Johnny Ryan (Ben Lawson) that she was able to strong-arm him into giving wannabe producer Kate (now Chalke sporting a Farrah ’do) what he called “the worst job in TV news.” For her part, Kate was as taken with the handsome Aussie as she had been with Tully; he all but had a wind machine sexily tousling his hair when she first laid eyes on him. And following a montage that could’ve been straight out of 9 to 5, he seemed to have noticed that there was more to his new hire than met the eye. She not only was good at the menial tasks she was assigned, she was a crackerjack copy editor, too. That, and “you’re sweet,” he noted, “maybe too sweet for the news.”

Definitely too sweet for Tully. On a night out at a club, Kate confided in her bestie that she was crushing on the boss. In that case, Tully said, she’d consider Johnny off limits. But no sooner had “Tainted Love” begun to play than the three of them had hit the dance floor, and she had rendered Kate all but invisible. Yes, literally seconds after Tully had promised to keep her hands off, she was letting the boss man mack on her and eating up the attention with a spoon. Whatever the female equivalent of the bro code was, she had broken it… along with Kate’s vulnerable heart. 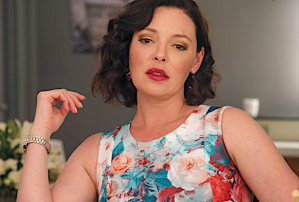 … THIS IS NOW | Well, now-ish. By 2003, Tully, at this point the host of a hit talk show called The Girlfriend Hour, was so successful that she had to pack a snack to make the trip from one end of her palatial apartment to the other. But she was sick of doing makeover shows, she complained to Kate. She used to be a real journalist! (Was she?) Soon-to-divorce Kate, meanwhile, was about to reenter the work force for the first time in a long time. But no, she didn’t want Tully to put in a good word for her at Seattle Digest; she wanted to land her new job on her own merits, not because she had a famous friend. Of course, when a call to the office of daughter Marah’s school principal made Kate late for her interview, she relented and played the Tully card to get the gig.

That evening at Kate’s mansion — yes, mansion; lotsa real-estate porn in this show, damn! — Tully reassured her pal that no matter what Marah said, she wasn’t responsible for breaking up their family. And maybe it was just the combination of Alprazolam and Merlot talking, but Tully saw a real upside to Kate’s divorce: After being with one guy for so long, “just think of all the new penises you’re about to meet.” Erm… Later, Tully took goddaughter Marah (Yael Yurman) to lunch to find out why she’d cut class — and actually got the youngster to admit that she’d gone to Planned Parenthood to get on the pill like all of her friends. Unfortunately, she’d needed an adult’s signature. Maybe Tully would give her her autograph? What if Marah promised to tell her mom if she was ever actually thinking of having sex? How about then? 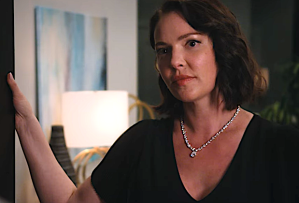 PAST AS PRESENT | Shopping for something to wear to a school gala that she’d helped organize, Kate ran into PTA crush Travis (Brandon Jay McLaren)… just as the salesclerk was bringing her her first-ever pair of Spanx. D’oh! Later, Kate beseeched Tully to be her plus-one, but alas, she was going to the premiere of a George Clooney movie. Hey, why not come over? Tully said. They could have a slumber party. When Kate turned her down, Tully briefly looked as if she was contemplating jumping off the roof, then went out and picked up a hot rando (Jon Ecker) to schtup against her wine fridge. “So I’m Max, by the way,” he said afterward. “I didn’t ask,” she replied. Nor did she want him to stick around. The only thing she wanted after midnight, she said, was a box of Krispy Kremes. OK, then! On the evening of Kate’s gala, Tully surprised her by showing up to be her date. “Tonight,” Tully said, “you are Cinderella, and I am your prince.” As Kate put herself down while finishing getting ready, Tully built her right back up — even going so far as to trade dresses with her — and insisted that she was the real success: Kate had been brave enough to have a family. Tully, on the other hand, never had and never would.

At the event, we were treated to a replay of the 1980s scene in which Tully stole Johnny right out from under Kate, only this time, it was Travis who found himself intoxicated by the sexpot’s moves on the dance floor. Gutted at seeing history repeat itself, Kate went home without bothering to tell Tully. And just when she thought that her night couldn’t get any worse, Kate discovered Marah’s Planned Parenthood form with Tully’s signature on it. At the same time, Tully returned to her penthouse to find a box of Krispy Kremes waiting for her. Soon, there was a knock at her door. Max? No — dun dun DUN! — Johnny. He was Kate’s estranged husband! Tully tried to send him home to his family, but he was all “Woe is me, my whole life’s been a mistake.” So could he just stay with Tully for the night? “I need you,” he insisted. D’oh! So, what did you think of the premiere of Firefly Lane? Will you keep watching? Grade the episode in the poll below, then hit the comments with your reviews. (While you’re here, you can also read our review.)