Chicago P.D.’s Kim Burgess made a life-altering decision Wednesday that is sure to have a rippling effect on both her professional and romantic relationships. Marina Squerciati, who plays the overwhelmed officer, opened up to TVLine about what’s in store.

This week’s episode saw Intelligence investigate a string of carjackings which led to the crew uncovering an illegal child prostitution ring. The sensitive case also put Burgess in the path of Michaela, the young girl she previously helped in the Jan. 13 episode “Tender Age.” After Michaela’s caregiver decided to relinquish her guardian rights, Burgess stepped in to foster her former witness. The episode ended with the Intelligence officer slowly and carefully pulling out of the parking lot with Michaela in the backseat and terror written all over her face. Is Burgess ready to handle this kind of responsibility?

“I don’t think she knows [what she’s getting into]. She’s just going on instinct,” Squerciati says of Burgess’ big decision. “Ruzek hits the nail on the head [when he tells her] ‘I think you can’t stand to see another child loss,’ which I think is true. She realizes that most of these children, especially the older children, won’t fare so well, so that’s a motivating force.”

Squerciati added that she believes Burgess and Michaela “have a special connection,” which helps with their precarious new situation. 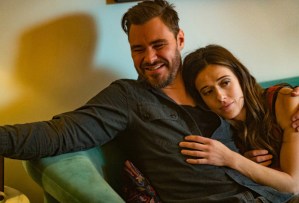 It’s still too early to determine how exactly this major decision will impact Burgess professionally, but it looks like this could be a game-changer for her and Ruzek: “They were headed towards something, and I don’t think this is going to make them go that way anymore,” Squerciati explained. “There’s some things you have to give up [when you become a parent], and I think Burgess might think that that’s Ruzek. I don’t know but I have a feeling we’re going that way.”

Burgess’ situation is even more complicated given that she is a white woman raising a Black girl, and will have certain blind spots when it comes to parenting a child of a different race. Squerciati hopes the issue is something her character won’t ignore, and that she’ll continue to lean on her close friend Atwater (played by LaRoyce Hawkins) — who raised his little sister Vinessa (Documentary Now!’s Bobbi MacKenzie) — for support. Burgess reached out Atwater in Wednesday’s episode to ask his opinion about the potential adoption — a move that seems to have helped inform her decision to foster Michaela.

“I’m really glad that scene with Atwater happened because I feel like without it, you run the danger of it being a white-savior-type of episode. The fact that she acknowledged and talked to him about the racial factor of it, I think, really helps that,” Squerciati explains.

When it comes to parenting, Squerciati thinks Burgess has a lot to consider. “There’s so many things that I’ve been thinking about. I don’t know how to do Black hair and Kevin [Atwater] could teach me how to do it,” she adds. “And of course, there are bigger issues and bigger blind spots that I hope our writers address. But I was just thinking about small things that I wouldn’t know that Atwater would because he had Vinessa that we could talk about.”

What do you think about Burgess’ decision to foster Michaela? How will it impact her relationship with Ruzek? Let us know your thoughts in the comments below!