Ethan and April’s romantic relationship might be over on Chicago Med, but the doc is still getting embroiled in Sexton family drama.

In this Wednesday’s episode (NBC, 8/7c), April’s brother Noah returns to the hospital’s Emergency Department and finds himself in a situation that not even his sister can fix. Whatever trouble he’s gotten into will cause “a big rift” between exes April and Ethan, executive producer Andrew Schneider previously told TVLine.

“That’s a really wonderful storyline,” actor Brian Tee adds. “I feel like the closest thing that Ethan now has to family is April and Noah, and they go through a particular case where it’s very, very difficult, and it’s a conflict of work meets family. Ethan has to make some really hard decisions, maybe some of the hardest decisions he’s ever had to make in the hospital,” especially as chief of the ED. 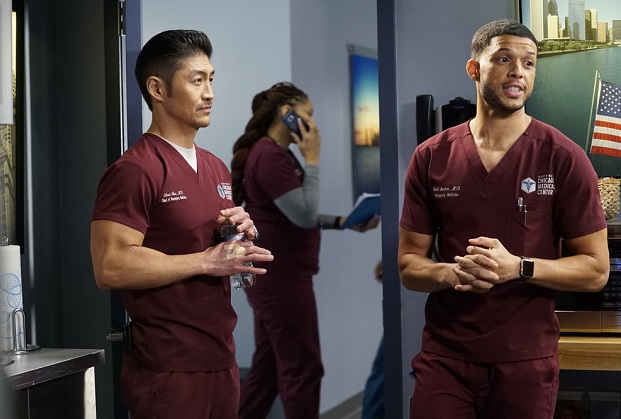 Ethan has been struggling in that new job title, even punching a bathroom paper towel dispenser in frustration during last week’s installment. “He has expectations, and they’re really, really high for himself and definitely for his staff,” Tee says. “He has this military background that he’s also leaned on, and he feels like the ED would probably be better if it ran that way. So his management skills aren’t necessarily the best, I would say, for the other characters.”

In Ethan’s mind, his way of doing things is “the right way,” but “he’s slowly coming to terms with [the idea] that it isn’t always so,” Tee continues. “The conflicts that you’ll see amongst the other characters will slowly kind of peel him away to, hopefully, come into a better position within himself and the position as chief as he moves forward.”

To help Ethan get a better handle on his demanding job, Goodwin suggests that he bring in someone to assist: Enter Dr. Dean Archer (recurring guest star Steven Weber), who was Ethan’s chief senior medical officer in the Navy. The ED boss is “really excited” about his former supervisor’s arrival, but Dr. Archer also creates “more speed bumps for Ethan,” Tee previews. “He’s going be there to help, but he sticks his head into places where he shouldn’t, and there’s going to be a huge conflict and messes he’ll actually make that Ethan has to come back and try to fix. So it’s going to be a really cool, wonderful arc as our season progresses forward.” (With reporting by Keisha Hatchett)