The Rookie will play host to yet another mini Castle reunion when Toks Olagundoye joins the ABC procedural for a multi-episode arc.

TVLine has confirmed that Olagundoye — who in what would be Castle‘s final season played sleuth Hayley Shipton — has been cast in the role of Fiona Ryan, Officer John Nolan’s professor in his Ethics and Criminal Justice class.

The stint reunites Olagundoye both with Castle‘s lead, Nathan Fillion, and one of the eight-season drama’s showrunners, Alexi Hawley.

Professor Ryan will first appear in the Sunday, Feb. 21 episode, titled “Revelations,” in which Nolan’s decision to return to school in order to become a training officer proves to be much harder than he expected. Elsewhere in that episode, Officer Chen considers going into undercover work, when Harper’s former colleague needs help. 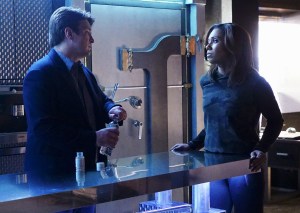 Olagundoye, whose previous TV credits include ABC’s The Neighbors, of course is but the latest Castle alum to cop a Rookie role. Seamus Dever, Jon Huertas, Annie Wersching and (onetime Castle guest star) Frances Fisher are among the others, though surely I am missing one/some.