This week on Batwoman, Alice’s not-so-warm reunion with Safiyah bore most unexpected fruit. But are you buying what the queen of Coryana is selling?

KO’d on the streets of Gotham last week by henchwoman Tatiana, Alice and Sophie woke up on the sun-dappled shore of Coryana, the idyllic island ruled by Safiyah. While Tatiana kept watch over a cuffed Sophie (and wondered why she had to keep her alive), Alice caught up with Safiyah — and by “caught up with,” we mean, “Repeatedly accused her of blowing up Kate’s plane.” Safiyah maintained that while she was angry with Alice for breaking the cardinal rule of Coryana — you don’t share with the world the  desert rose flower’s miracle cure-like properties — she did not kill Kate. Though someone wants Alice to think she did

As the two talked more, we got hints of how Safiyah years ago found Alice on a yacht her people were raiding, soon after a “broken” Alice had escaped captivity.  At one point, Safiyah comfortingly reached for Alice’s hand, and Alice took it — and then she firmly held it as she wrestling her host to the ground and held a pointed shell to her throat. “You took everything from me!,” Alice insisted. Safiyah quickly turned the tables and pinned down Alice, countering, “because I gave you everything.” In fact, she now is poised to give Alice back her sister, Safiyah says, producing Kate’s necklace. “If I blew up Kate’s plane with her inside, how could I possible have this?”

Meanwhile, Tatiana was fixin’ to kill Sophie, knowing that she would not let Alice roam free once they are returned to Gotham City. Safiyah prevented the kill and uncuffed Sophie, only to have a henchman drug her with a syringe. Safiyah then assured Alice she has every intention of giving her Kate back, but first she needs Alice to do something for her….

Alice and Sophie later woke up in a Gotham City alley, and Sophie wasn’t about to let Alice roam free. “But if you arrest me,” Alice explains, she won’t be able to do her job for Safiyah… and thus get Kate back! 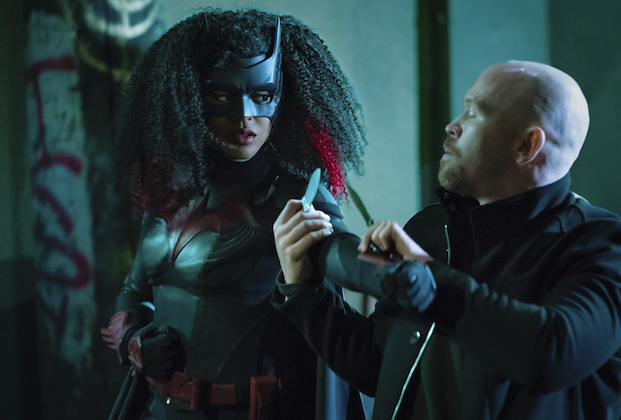 * Ryan, Luke and Mary put their heads together to hunt down Victor Zsasz, a hired gun on whom Ryan (as Batwoman) found a thumb drive with a long hit list of Gotham City randos. Turns out that Zsasz was working for Safiyah, targeting all the people who have traces of the desert rose flower in their systems, after being saved from last week’s bat-poisonings. Zsasz ultimately made a run at Mary herself, but got stopped and bested by Batwoman, who is now sporting a snazzy, personalized new suit.

* Kate’s phone turned up in the plane wreckage, and once Commander Kane had it unlocked (after waiting as long as he could for Sophie to resurface and help with Kate’s password), he found a curious photo of a painting by Jack Napier, with Safiyah’s name scrawled across it. So now Safiyah is on his radar, too.

* Luke arrived at a certain peace with both Mary and then Ryan, amid much tension in the Batcave stemming from his refusal/reluctance to believe that Kate isn’t ever coming back to reclaim the Bat-mantle. As a sign of this detente, he brought to Ryan (at her new gig managing The Hold-Up) new batarangs, after she burned threw a whole bunch due to her poor aim. But he draws the line at any Batmobile upgrades!

What did you think of the episode “Bat Girl Magic”? Does Safiyah really have Kate somewhere, alive? Or is she just baiting Alice, as some sort of revenge?