Things have been going really well for Chicago P.D.‘s Burgess and Ruzek lately, which begs the question: When will they stop messing around and finally get back together?

In the aftermath of Burgess’ miscarriage last season, the pair have only gotten closer while working through their shared trauma. They hang out together, work together and as Ruzek so expertly observed in the Jan. 13 episode “Tender Age,” they’re basically an old married couple at this point.

A romantic reconciliation seems like the logical next step, so why haven’t they moved forward in their relationship? For Marina Squerciati, who plays Burgess, the not-couple is in too good of a place right now to shake things up. 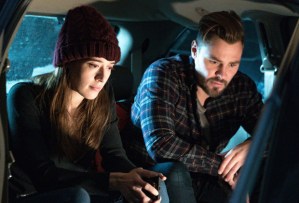 “What’s keeping them apart is how well they get along,” Squerciati tells TVLine. “Burgess is scared of anything new right now because of this miscarriage and the trauma she suffered, so comfort is the main goal in her life. Just flannel shirts and ice cream on the couch — anything else seems scary. Their biggest problem is they’re too comfortable, and Burgess is really happy right now.”

Patrick John Flueger, who plays Ruzek, thinks the pair is exactly where they need to be at the moment. “I think that it’s an incredibly adult relationship,” he explains. “These are two people that love each other enough to take steps back when they need to, and lean forward when they need to. At the end of the day, they just love each other, and they can’t really escape from that. Right now, [Ruzek and Burgess] feeling each other out and feeling out life works for them really well.”

Though they’ve hit a pretty comfortable routine, there is still the potential for the Intelligence detectives to once again make things official. However, Squerciati says that it’s going to take a lot more than sweet talk for Burgess to want to make that leap again: “Ruzek says a lot of really wonderful things, but I think he needs to do something super romantic or really show up.”

Should Burgess and Ruzek get back together right now? Let us know your thoughts in the comments below!