Earlier that day, McCarthy was pictured at the former president’s Mar-a-Lago resort in Palm Beach, Fla., where the two reportedly reconciled and discussed a strategy for Republicans to regain a majority in the 2022 midterm elections. Afterwards, McCarthy released a statement, which in part read: “Today, President Trump committed to helping elect Republicans in the House and Senate in 2022. A united conservative movement will strengthen the bonds of our citizens and uphold the freedoms our country was founded on.”

Later on, Williams promised viewers of The 11th Hour “the first exclusive video” from the meeting, then cut to the iconic “you complete me” scene from 1996’s Jerry Maguire, where Tom Cruise’s eponymous character professes his love to Renée Zellweger’s Dorothy Boyd.

Brian Williams is the best!pic.twitter.com/gywJ5c4JNS

“Obviously, we have rolled the wrong clip,” Williams deadpanned. “We were sold a bill of good here. I thought this was going to be of the McCarthy and Trump meeting and someone is going to be, of course, in big trouble.” 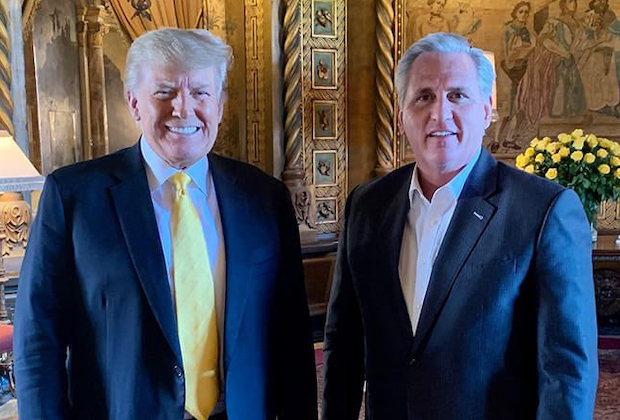 The picture of Trump and McCarthy was the first publicized photo of Trump since he departed the White House on Jan. 20. One week prior to his exit, the House of Representatives voted to impeach him for an historic second time. The impeachment trial is expected to get underway on Tuesday, Feb. 9.

Press PLAY on the video above to see the viral moment unfold, then hit the comments with your immediate reactions to this bit of cable news tomfoolery.