We don’t yet know who is behind WandaVision’s seemingly perfect alternate reality — is Wanda the architect? Or could this be the work of a malevolent force? — but the Disney+ series is clear about who runs the suburban town within it.

In the second episode, titled “Don’t Touch That Dial,” we were introduced to Dottie Jones (Buffy the Vampire Slayer‘s Emma Caulfield), a Regina George-like figure who, according to Agness (Kathryn Hahn), is the “key to everything” in Westview.

She’s married to Phil (who was fired by Vision’s boss in the first episode, “Filmed Before a Live Studio Audience”) and isn’t particularly fond of the show’s titular heroes. (“I’ve heard things about you, you and your husband Vision,” she told Wanda during an icy exchange.) It’s unclear what her role will be as the story picks up, but judging by her memorable appearance, she’s just getting started.

“The whole thing’s a lot of fun,” Caulfield tells TVLine. 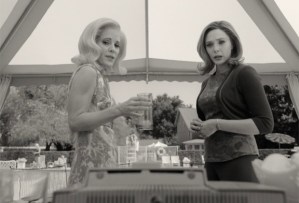 A jarring scene at the gazebo suggested there’s much more to Dottie than she’s currently letting on. When Wanda told her she means no harm, the well-dressed homemaker said she doesn’t believe her. Both women were then interrupted by Randall Park’s FBI agent Jimmy Woo calling to Wanda through the radio. The confusing moment seemingly snapped Dottie out of her sitcom character, and she questioned Wanda’s identity before shattering a glass in her hand, cutting herself in the process. Jumping back into character, Dottie made an off-the-cuff joke about bloodstains, and the moment was quickly forgotten.

“It’s incredibly disconcerting for Dottie to hear [the voice in the radio] as it is for Wanda. Both of us are having a surreal moment for very different reasons,” Caulfield explains. “But in the end, it’s terrifying for both of us, and there’s that element of gaining control of ourselves again.”

That bizarre moment is one of several that have left fans buzzing about Westview’s resident queen bee. In another, Wanda and Vision put on a disastrous yet hysterical magic show that briefly featured a fluffy white rabbit. The cameo has been interpreted as a nod to Caulfield’s beloved Buffy character Anya, who notoriously feared bunnies in the Joss Whedon series. However, Caulfield reveals that she didn’t make the Buffy connection until it was pointed out to her.

“I shot it, and I didn’t catch it. I didn’t have anything to do with the rabbit. This is Wanda’s action. It’s her magic act with Vision. I did not catch it,” she says. Caulfield also reveals that she texted WandaVision creator Jac Schaeffer, who she previously worked with on the 2009 sci-fi film Timer, to ask if that was an intentional reference.

“She would have said something if that was her intention, to put that little Buffy Easter egg in there. She never said anything to me about it, so I think it’s pure coincidence,” she adds, while noting that “it would make sense that somebody would throw a fun little Easter egg in there like that.”