If an alien were strolling the sidewalks of your city, you probably wouldn’t think that Googling definitions for “douchebag” and “taint” would be high on its priority list. But, hey — even extraterrestrials want to fit in sometimes.

Welcome to Resident Alien, Syfy/USA Network’s new series that follows a shape-shifting alien (played by Firefly‘s Alan Tudyk) posing as a human doctor in a small Colorado town. Though “Harry” never planned on stepping foot on Earth, he crash lands his spaceship, losing a device he needs to complete a mysterious mission in the process. In the show’s premiere Wednesday, when the town’s real doctor winds up dead, Harry gets pulled into society in ways he never expected, including assisting in the puzzling murder case of the beloved physician. But in the episode’s final moments, we learn what Harry’s true intent really is: to kill all humans. Every last one of them.

Will Harry’s plans change once he befriends the town’s residents? Series creator/EP Chris Sheridan (Family Guy) talked to TVLine about this and more, including why Tudyk was the right guy for the gig and what’s to come later this season.

TVLINE | Alan Tudyk is pitch-perfect in this role. Was it written with him in mind?
I didn’t write it with anyone in mind, really. When we started auditioning, we saw dozens of actors. I thought I knew what the character was until Alan came in. I knew that what he was doing was what it should be. It wasn’t far off from what I had pictured, but it was far off enough that I felt ashamed I hadn’t thought of it.

Alan came in and was able to do what other actors weren’t doing, which was being alien without being robotic, but also having enough humanity in him so that people wouldn’t think, “This guy is from outer space.” It’s a really fine line. In a lot of cases, the choices were to play it like a leading man, and as soon as you do that you forget that it’s an alien. Then, there were actors who came in and just played the alien, and as soon as they did that, you feel like that’ll never work because it’s not a cartoon. Alan was able to walk that line perfectly. He was one of the few who was able to do an alien take and be hysterical at the same time without it feeling broad or jokey. His humanity comes through because Alan himself has a lot of humanity. He’s a good person and has good energy, and that comes through in his performance. [Harry] makes some bad choices in the pilot, so I was depending on a little bit of help from the actor to help the audience forgive him for some of the things he does, and Alan was able to do that for us. (Read what Tudyk had to say about the role here.)

TVLINE | Can you tell us a little bit about the creature design for the alien? Is it mostly practical effects, and is that actually Alan in the mask?
In the pilot, we didn’t have time to put Alan in the mask except for one scene we had to reshoot. In Episode 2, we fit Alan for the mask. It takes a couple hours [to get in the mask] in what is already a really long day. I asked him, “Would you be willing to do that?” because I felt like we would get a better performance if he did it himself, and there was no question in his mind. He was like, “Of course I’m doing it.”

The mask is put on in pieces and then painted. Bill Terezakas, who created the sculpture and the mask, did such an incredible job. From the middle of the face down, he created what I think is silicon in a thinner layer, so that whatever expressions Alan has in his mouth and lower part of his face come through in the mask. Everything from the middle of the face up is denser. All the eye movements, the blinks, the brow… is all a 2-D digital overlay. Alan’s acting really comes through in that mask in large part because of the way Bill designed it. It really is a brilliant construction. 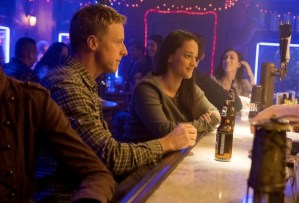 TVLINE | It doesn’t take long for Harry and Asta to form a friendship. Despite Harry’s awkwardness, what brings them together so fast?
Asta has walls up and is closed off to everybody, but finds herself opening up to Harry in the pilot in a way she hasn’t done with anyone else in a long time. Harry was there for her, and in her opening up and giving Harry her positive energy, that hits Harry, who then drops his alien walls a bit. There’s a moment [in Episode 1] where Asta gives him a compliment and says, “You did a good job,” and that is the beginning, in my mind, of Harry gaining the knowledge of what it’s like to be human. He feels something warm in that moment, and that’s the reason he protects her in the pilot. It’s the thing that begins to connect them together.

TVLINE | At the end of the premiere, the alien makes it very clear he’s a villain that wants to destroy mankind. What can you tease about Harry’s relationship to humanity, and will that change over time?
Harry comes to Earth not caring about humans at all. His alien species doesn’t have emotions or feelings, they have missions to accomplish. They look at us like we’re ants or the moth in the cabinet that’s eating your crackers. When he gets down here and takes over the body, he realizes he’s actually infected with human emotions, so he’s starting to feel these things that humans feel… love, fear, hate, all these things he never had before.

One of the things I realized early on was that his journey is really that of a child. He’s the child in the playground who pushes another kid over and when that kid starts crying, it makes the first kid feel bad and say, “Oh, maybe I don’t want to do that again. I don’t like how it feels when I make that kid cry.” As Harry slowly starts to gain these human emotions, he’s slowly gaining empathy the way a kid does. We’ll watch Harry slowly start to learn what it’s like to feel and be human.

What did you think of the Resident Alien premiere? Vote in the polls below, then drop some comments!