Chicago P.D’s Nicole Ari Parker would like you to put some respect on Deputy Superintendent Samantha Miller’s name. The renowned actress recurs in Season 8 as Deputy Miller, a fierce advocate for police reform.

“The level of work and commitment and dedication and climbing that food chain, we need to give her her flowers,” Parker tells TVLine. “The only person higher than her in ranking [currently] is the mayor, so she’s a force.”

Parker, whose lengthy credits include Empire, Soul Food and Remember the Titans, is no stranger to the Dick Wolf family. She starred opposite Law & Order heavyweights Chris Noth, Dan Florek, Jerry Orbach, S. Epatha Merkerson, Sam Waterston and Ice-T in the 1998 film Exiled: A Law & Order Movie. Plus, her longtime friend Eriq La Salle, who directed the Soul Food pilot, is a Chicago P.D. staple behind the scenes after directing 20 episodes thus far. Parker jumped at the chance to work alongside her friend once more and to be a part of the series she describes as “gritty” and “real.”

Wednesday’s episode, titled “Unforgiven,” will see Parker hesitant to defend the legacy of murdered cop until Intelligence completes their investigation. She and Voight don’t exactly see eye-to-eye on the situation, and this case illustrates their different perspectives on policing. They might not agree with each other, but the pair will need to work together to ensure that justice is served.

“There’s a level of humanity that is going to be part of the solution,” Parker explains. “In order to open a character like Voight’s eyes, he’s got to see the humanity in the people that he’s policing. And for Deputy Miller to be very effective, she’s got to realize that Voight is human, too. It’s hard when you think you’re right to make space for both of those cases.” 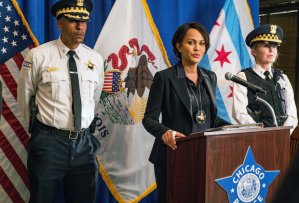 Deputy Miller will play a major role in shifting Intelligence’s approach to policing this season, and according to Parker, those changes will come as the crew encounters different “crises.” So far, we’ve seen Atwater go up against the Blue Wall after reporting a racist cop and face retaliation in the form of thinly veiled threats and drugs planted in his car. With Atwater’s situation far from over — LaRoyce Hawkins, who plays the detective, confirmed to reporters that this storyline will continue — the question remains: How will Miller handle things if it reaches her level?

“I think Atwater is one of the many things that she has to temper her personal feelings about with the letter of the law. She has to be a unifying force, and making sure that ‘protect and serve’ is still the oath that everybody took,” Parker says. “The invisible microaggressions that go on and the obvious, aggressive behavior that goes on within the department, I think she really has to find her legal parameters as well as her emotional parameters to make change.”