Season 2 of TNT’s Snowpiercer pulled out of the proverbial station this Monday night, wasting no time in teasing new inter-train dynamics while dropping the tiniest hint of a major development.

Caught up to and latched onto by suped-up supply train Big Alice, the 994 car-strong Snowpiercer how has a 40-car monkey on its back. Melanie’s not-dead daughter Alex barked out demands, issuing a “shopping list” (food, beer, books, hens, and Mr. Wilford’s favorite scotch, etc;) to be filled by Andre & Co., lest her boss uncouple the trains and leave Snowpiercer dead in the frozen water.

Meanwhile, Melanie — who had been thrown from the train when last we tuned in — crawled beneath the coupling and went about severing Big Alice’s connection to Snowpiercer’s systems. After a mutant-looking giant from Big Alice lugged away their demanded foodstuffs, Big Alice fired up its engines and the trains began moving. Melanie darted between two wheels into the drifts alongside the track, where she realized her suit had been punctured and she was freezing to death. As she lay there, a snowflake drifted onto the face of her helmet. This is a big deal, we were reminded when she reported back to Ben, because the world had been rendered too cold for it to even snow. So… is the iced-over Earth beginning to thaw? Before clambering aboard the accelerating train, Mel scooped up a vial of the freshly fallen white stuff.

Melanie was welcomed aboard Big Alice by Kevin, a bitter former colleague who zapped her with a cattle prod and then led her upstairs to Mr. Wilford’s suite, where she was also reunited with his dog, Jupiter. Melanie egged Wilford to tell all — of how Big Alice waited for its moment to pounce, taking a shortcut using test track in the Rocky Mountains before intercepting Snowpiercer in Chicago. Wilford, though, only wants one thing: the “keys” to Snowpiercer. And if he doesn’t get them, he will “drop anchor” and grind his old train to a sub-zero halt. 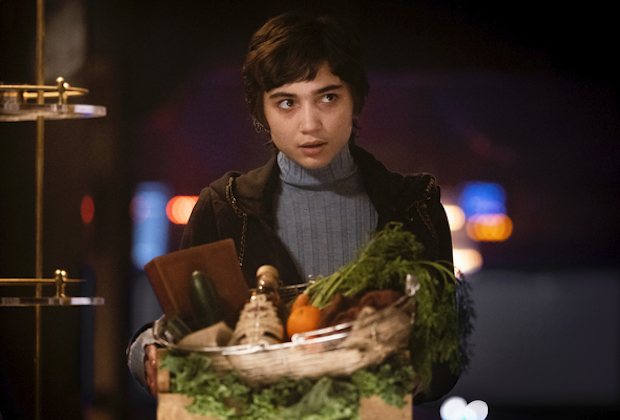 Just then, Alex arrives, and while Melanie is stunned and overjoyed see her daughter alive, Alex is “distinctly underwhelmed.” Melanie explains how she sent people to get Alex, grandma and grandpa, but they never came back. Alex, though, only cares about apprising Wilford of the “shambles” of a situation on the other train, including how someone named Layton is in charge (with help from “that blonde in housekeeping”), and how she saw no jackboots. She then has Kevin take her mom to the brig.

Andre meanwhile has gone about surveying the new world order, making sure that enough people are minding the tail, which is now a “borderland.” During a council meeting in the Night Car, Ruth suggests that Melanie is “working things out” with Wilford, but Andre maintains, “A 40-car parasite does not call the shots around here” — and that, though tired from the revolution they just fought, they need to hit Big Alice “before they hit us.” After the meeting, some tailies bully Zarah about selling out Josie, but Andre breaks things up, during which it comes out that Zarah is pregnant with his child. Ruth is a bit tickled by the idea of a baby being born on Snowpiercer (and the “hope” that it brings), so she safely sets up the parents-to-be in a First Class home that had been vacated by an old couple who Cyanide’d their way out of the revolution. At Ruth’s urging, Andre addresses the train via the PA system, saying that given the new developments, they must put their democracy experiment on hold and “extend martial law until further notice.”

Alex visits Melanie in the brig, saying that she remembers “less and less of the old world.” She explains how Grandma and Grandpa wouldn’t leave with the men that Melanie sent, and Alex didn’t want to leave them behind. Alex then quizzes her mom about the snow sample found in her snowsuit. Melanie claims that she was simply curious, having not been outside the train in seven years, but Alex feels she is being lied to. Melanie is led to Big Alice’s makeshift medical clinic, where a pair of daffy doctors tend to her gnarly bit of frostbite by applying what they call Goop, a “breakthrough” synthetic-tissue salve that will heal and leave no scar. 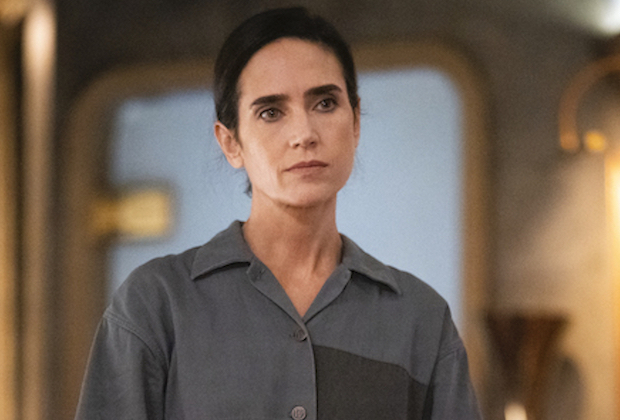 Meanwhile on Snowpiercer, Pike and a Big Alice counterpart on the other side of the door begin bartering — fresh food, for example, for a QP of “Amazing Alice” marijuana. Andre eventually (and quite literally) catches wind of what’s going on, but sees an opportunity. He has Pike initiate another trade, except this time when the door unlocks, a small army of Snowpiercer passengers (Snow-men?) heave and jam it open, before storming the other train. Andre, Till et al make quick progress through the first couple of cars, only to be stopped cold by that mutated mountain of man, who somehow is impervious to the sub-zero outside air that he begins blasting the attackers with.

Wilford, fresh out of the tub and in the midst of dinner with Melanie, gets wind of the incursion, but scoffs at the plan to hold hostage Kevin, of all people, to trade for Melanie. He then rails at Melanie about how she was “fixing tractors on a farm” at age 17 when he lifted her out of “pig s–t” and invited her to help him build this new world. He drags Melanie to the engine, and orders Alex to bring the trains to a full stop. He threatens to uncouple the trains and pull Big Alice away, unless Melanie gets Layton to surrender. When Wilford gives the order, Melanie tells Alex not to comply, saying “a whole world will die. You don’t want that on conscience.”

Undeterred, Alex goes ahead and flips the switch… and it triggers an explosion up train, at the coupling. As we saw earlier, Melanie had planted a sticky bomb when she was outside, and now Alex is unable to disconnect Big Alice from Snowpiercer. The trains are permanently attached. Admittedly impressed by her mom, Alex quips to Wilford, “She got you,” and he begrudgingly gives the order for the trains to resume moving — while Andre aboard Snowpiercer observes, “It’s going to be a long, cold war.”

What did you think of Snowpiercer’s return, Melanie’s masterful move, and the prospect of a welcome global warming?