We finally know what brings 9-1-1‘s Buck & Co. down to Texas for Fox’s much-hyped crossover with 9-1-1: Lone Star. And it’s pretty much Smokey the Bear’s worst nightmare.

This week’s Lone Star found the 126 dealing with volcanic activity throughout the city, and while Tommy and Owen’s teams were mostly successful, they couldn’t save everyone. Nor could they have known, as we discovered in the episode’s chilling final moments, that the lava would spark a massive forest fire — one that will require out-of-state reinforcements.

Following that ominous imagery, Fox released the first promo for next Monday’s crossover event (9/8c), which you can watch below: 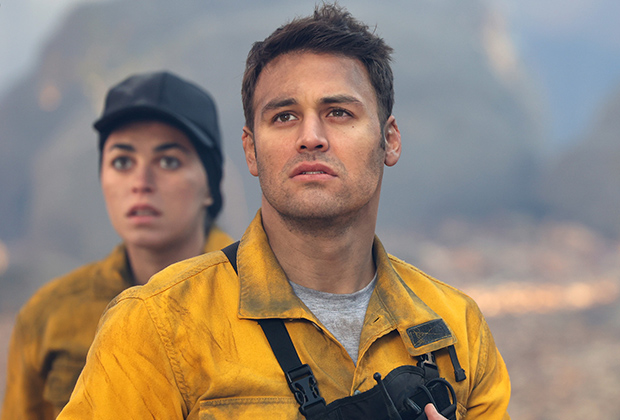 As seen in the trailer, Buck (Oliver Stark), Eddie (Ryan Guzman) and Hen (Aisha Hinds) are the lucky three making the trek down to Austin, where they’ll battle the blaze alongside Owen, T.K. and the rest of the 126. Judd (Jim Parrack) and Eddie appear to develop an especially chummy bond, with the Texan asking his new guest, “What are you waiting for, Hollywood? Let’s roll out!”

Which 9-1-1 and Lone Star characters are you looking forward to seeing cross paths next week? Click here to check out official stills from the episode, then drop a comment with your hopes for the crossover below.