THE PERFORMANCE | There’s been a lot of fanfare around Leslie, who makes history as the first Black woman to portray Batwoman on screen. She had the difficult task of carrying that responsibility while introducing an original character in a show brimming with already established characters and with a full season under its belt. Leslie handled that immense pressure like a pro and, in her stellar debut, delivered a wholly likeable hero worthy of continuing Batman’s legacy.

Simply put, Leslie’s Ryan Wilder is breath of fresh air. She’s vulnerable, determined, a little goofy and empowering — even as she’s rattling off a page’s worth of sobering statistics. “I am the 327th baby of a Black woman who died during childbirth that year,” Ryan told Mary and Luke in one scene. Leslie shines as Batwoman because of her fierce commitment to the words given to her and her undeniable charisma which radiates across the screen.

The scene that really tipped Leslie over the edge this week came at the end of the episode when she literally beat the prosthetic face off the man who shot her. It was equally devastating and satisfying to watch Ryan, simmering with rage, deliver harsh blow after harsh blow. It never felt forced or over-the-top; you understood where she was coming from and you felt her pain in every millisecond of that scene.

In just under an hour, Leslie proved that she could do just about anything. Whether it’s tapping into the gut-wrenching agony of losing a loved one or the sheer wonderment of discovering a cool superhero suit, she made us believe every line and every emotion with remarkable ease. She might be just getting started but, in her first outing, Leslie did that. 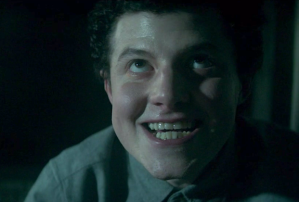 HONORABLE MENTION | This week’s episode of Prodigal Son was perhaps the show’s spookiest outing yet, thanks in large part to guest actor Adam Langdon‘s terrifying performance. In his lone scene as Norman, a murder suspect who believed himself to be possessed by a demon, Langdon was at first calm and measured, unsettling us with the slow, soft way he spoke. But after Bright stepped over the line of salt that allegedly kept Norman’s demon at bay, Langdon was a completely different kind of scary, pitching his voice much lower as a creepy grin crossed his face. “He wanted it out, but it doesn’t want out. He’s in my blood! He’s in your blood!” Norman taunted with maniacal glee, crouched on the floor as he worked himself into a demonic frenzy. In the end, despite his unnerving behavior, Norman wasn’t the murderer, after all — but Langdon’s performance sure was killer. 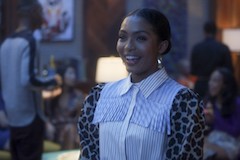 HONORABLE MENTION | And just like that, Yara Shahidi reminded us how much we missed grown-ish and her character Zoey’s now signature and comedic fourth-wall breaks. The collegial Freeform comedy returned for Season 3B Thursday and allowed Shahidi to flex a full range of relatable emotions. She gave us stiff posture and turned up hoodies and pouts for work-place shade with her pushy new client Indigo (rapper Saweetie) and nervous energy and giddy giggles at the thought of reuniting with Aaron (Trevor Jackson) after her fashion styling work was complete. Sadly for Zoey, her anticipatory vibe turned into crestfallen disappointment when, after a month away, she flies back to Los Angeles and learns Aaron has justifiably moved on with a new girlfriend. So much for that steamy good-bye kiss they shared. Given Zoey and Aaron’s history, they’ll reconnect romantically. But until they do, Shahidi’s boundless expressiveness makes her the perfect conduit for this rollercoaster of love. 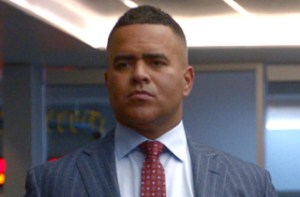 HONORABLE MENTION | For Chunk Palmer this week, it was the best of times (as he braved his first medical malpractice case)… and it was the worst of times (as he at a critical juncture earned Bull‘s ire). And with that roller coaster ride, series vet Christopher Jackson had one of his most interesting episodes to play. From go, Chunk was confident but prudent in approaching the case, and Jackson found just the right balance of measured swagger. But when Chunk waved off his boss’ suggestion of a recess to instead dive in and cross an unpredictable witness, he was later met by Bull’s proverbial horns. With that setback, Jackson had to play just the right notes of conviction and contrition. It was an important episode for Chunk, as he aims to improve his “up-and-comer” status, but also a nice showcase for his portrayer.