Supernatural boarding school? Redheaded heroine? Untrustworthy adults? Yes, Fate: The Winx Saga checks off all the requisite boxes for a Netflix teen drama — along with one fairy important twist.

For the uninitiated, Fate is a live-action adaptation of a popular Italian animated franchise about fighting fairies called Winx Club, which has existed in various forms — including hundreds of episodes, multiple spinoffs and several films — since 2004. Though the characters’ designs and scenarios have undergone multiple changes throughout the years (for better or worse), Netflix’s decidedly adult adaptation marks the most significant departure from the source material to date.

In addition to Fate‘s darker tone, there are a number of striking visual differences from the animated series. And while we’re actually relieved to see that the characters’ wardrobes have been toned down — let’s be honest, these fairies were conceived during a bleak time for fashion — we do miss seeing the ladies rocking their signature wings. As explained in Episode 1, years of evolution have cost the species its transformation powers. 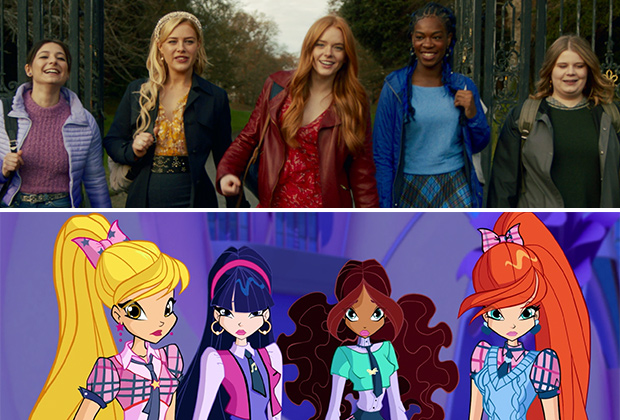 (Click here to check out side-by-side comparisons of Fate‘s characters and their Winx Club counterparts.)

Fate‘s premiere reintroduces viewers to Bloom, a fire fairy from the far-off realm of California. Despite being new to the fairy world, Bloom is relatively unfazed by her new surroundings. Then again, with her complicated backstory, inexcusably hot dad and vaguely rebellious streak (“I’m whatever the opposite of a cheerleader is”), Bloom was clearly born to be a YA heroine. She’s got this.

We also meet Bloom’s new suitemates at Alfea, most of whom should sound familiar to Winx Club fans. There’s Aisha, a water fairy with a penchant for protecting others at her own peril; Stella, a light fairy (and literal princess) who uses a killer wardrobe and icy glare to mask her insecurities; Musa, a mind fairy whose empathic powers prove to be more of a curse than a gift; and Terra, an earth fairy whose sunny disposition is often mistaken for weakness — as a fat-shaming jerk named Riven learns when she uses vines to choke him out. (Side note: Terra casually mentions that she has a cousin named Flora, one of the original Winx fairies. So there’s still hope that she may turn up yet!)

We come to learn that Alfea is home to all manner of dubious characters — from Headmistress Dowling, who knows more about Bloom’s true nature (a “changeling,” you say?) than she lets on, to Beatrix, who might as well be wearing a name tag that says “Hello, my name is The Villain.”

Over the course of Fate’s six episodes — which feel like a prequel to a much larger, though not-yet-ordered, adventure — Bloom gradually uncovers the truth about her upbringing through a treacherous journey that wreaks havoc on the lives (and loves) of everyone in Alfea. But will you stick around to see how it all turns out? Grade the premiere below, then drop a comment with your full review.