If you tuned into The CW’s Walker expecting Jared Padalecki to karate-chop criminals, then you were probably surprised by what you got instead during Thursday’s series premiere: an emotional family drama.

The Walker, Texas Ranger reboot stars Supernatural vet Padalecki as the titular law enforcement agent, Cordell Walker, who starts out the pilot as a husband and father but soon becomes a widowed dad to two teenagers after his wife Emily (Supernatural‘s Genevieve Padalecki) is murdered under suspicious circumstances. Shortly after that, Walker goes on an undercover assignment that takes him away from his kids for 10 months. When he returns to Austin, Texas, his first order of business isn’t to reunite with his children, but to drink away the heavy weight he’s shouldering.

“I’m still carrying the work with me. Didn’t want to get the stink of it on them. Needed to go visit a ghost instead,” he tells trooper Micki Ramirez (The 100‘s Lindsey Morgan) when she picks him up at his and Emily’s spot and drives him home. What awaits Walker there is a much different family unit than the one he’s used to: His rancher father Bonham (Supernatural and X-Files vet Mitch Pileggi) and mother Abeline (Jane the Virgin‘s Molly Hagan) have enrolled the kids in a Catholic school (“We didn’t want that for them,” Walker says), and his assistant D.A. brother Liam (Pretty Little Liars‘ Keegan Allen) has moved in to help with the teens. Even though he’s home now, Walker sure does need the help, because his kids are like strangers to him. While August (Me, Myself and I‘s Kale Culley) is happy his dad is back, Abeline advises Walker not to take the boy for granted. Meanwhile, 16-year-old Stella (Sharp Objects‘ Violet Brinson) is far more feisty and angry with her dad for abandoning them for nearly a year. 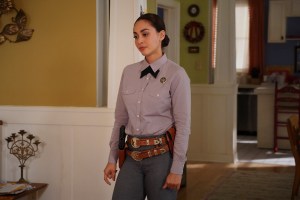 As for his work, Walker discovers that Micki, who has just been promoted to Texas Ranger, is his new partner, and his old partner Larry James (The Game‘s Coby Bell) is now his boss. Micki warns Walker, who’s known for doing things his way, not to ruin this opportunity for her as they set out to investigate a case involving cartel drugs. The investigation isn’t that important, nor is it one of the episode’s strong points. Far more interesting is the storyline potential with Micki, a Mexican-American women, serving in the Texas Rangers.

The racial politics of the area are also highlighted with Stella’s Mexican-American friend, whose parents are fearful that they’ll be deported after their daughter breaks the law. Walker plans to have Liam talk to his contacts about speeding up their paperwork. For Micki, the situation reminds her of something her mother says (“See, who does the law protect? Not us”), so it’s not surprising that, given Micki’s choice of career, the two women aren’t on speaking terms. “To her, it’s a personal betrayal. To me, it was always a way to set things right,” Micki explains to Walker.

After Micki and Walker successfully close their case, James offers Walker a position on a task force that’s being set up to take down the cartel. But Walker decides not to take the gig after chatting with his mother and his brother, who both, essentially, tell him to start being present. When Stella suggests that he might feel different about turning down the job in the morning, Walker responds, “I’m not going to feel different about you, about being here… I’m learning. Now’s all we got.”

The cast also includes Jeff Pierre (Once Upon a Time, Beyond) as Micki’s military medic boyfriend Trey. Additionally, Odette Annable (Supergirl) appears in the recurring role of Walker and Emily’s friend Geri, who was with Emily the night she died.

What did you think of the Walker premiere? Grade it below, then hit the comments with your thoughts!