One of the laughs you heard coming from the studio audience during WandaVision‘s first episode very well may have come from cast member Teyonah Parris herself.

Though Parris would not appear as the Disney+ series’ “Geraldine” until the second episode, “I actually got to be in the live studio audience, watching them film that first episode,” she shares with TVLine. “I got to take a little ‘cheat day’ and absorb it all and watch my amazing castmates, Lizzie [Olsen] and Paul [Bettany] and Kathryn [Hahn], kill it. And then I jumped in with them a little later.”

When Parris, whose previous TV credits include Mad Men and Survivor’s Remorse, first auditioned for the sitcom-y series, she says she had “no clue” it was from the creators of the big screen’s MCU. “I was like, ‘Wait, did you guys say this was a Marvel project? Because this just isn’t making sense,'” she recalls. “[The audition script] was one of the earlier episodes, and I just didn’t get it.”

Even when counseled during the audition process that “more is better, you can be over-the-top,” Parris says she feared the worst. “I’m just thinking, ‘Oh my gosh, this tape is so bad, I don’t understand what’s happening.'” And yet she wound up not only booking WandaVision, but an MCU film as well. “It was definitely a process, for WandaVision. And then as that started to evolve, we all heard about Captain Marvel 2,” she says.

Yes, Parris will follow up WandaVision with the Captain Marvel sequel, because — as has been well reported, but we’ll throw up a bold SPOILER ALERT! just in case — “Geraldine” is in fact a grown-up Monica Rambeau, as in former United States Air Force pilot Maria’s daughter (played by Akira Akbar in the first, 1995-set Captain Marvel film). Geraldine just doesn’t know it..? Or, maybe she knows it and is withholding it? Or… well, there’s any number of possible reasons for the apparent identity crisis, which will inch a bit more to the fore in this Friday’s third episode, building to a jaw-dropping closing moment. 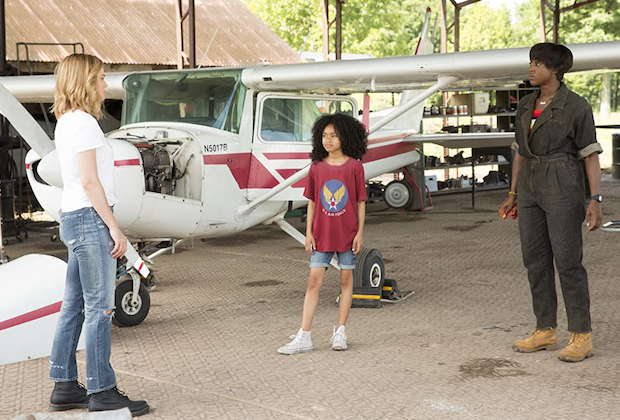 “[WandaVision] picks up right after the events of [Avengers:] Endgame, and for Monica, it’s obviously years later from when we saw her as a girl in Captain Marvel,” Parris notes. As the series unfolds and (judging by the trailer) transitions into some rather different, “we get to find out what’s been happening with her over those years that we missed, how she’s grown and evolved.”

But until the veil was lifted on whatever in the universe is going on with Wanda, Vision and Monica (if not others), Parris focused on portraying “Geraldine” in all her sitcom-style glory.

“For the ’70s/Brady Bunch episode (premiering Jan. 22), I would say my point of reference was definitely a bit of Thelma and Willona from Good Times. I definitely used a bit of them,” she shares. And yet even as she and others nailed the aesthetics, physical comedy and specific tone that WandaVision was aiming for, Parris had to wonder: “Does that even fit into the Marvel world? There were so many elements that were working with each other, or against each other, in a dynamic way.” (With reporting by Rebecca Iannucci)