Horseshoe Bay’s motley crew of amateur sleuths resumed the most important mystery of their lives on Wednesday: How does one stop oneself from being murdered by a vengeful sea spirit? (We said it was important, not relatable.)

Nancy Drew‘s second season premiere picked up right where the CW drama’s truncated freshman finale left off, with Nancy & Co. scrambling to outsmart the Aglaeca, when Detective Tamura arrived with troubling news. A young woman named Amanda Bobbsey was hit by a car in the woods — sorry, make that haunted woods — and the last thing she said before losing consciousness was Nancy’s name. Not good.

Long story short, Amanda and her twin brother Gil (aka the Bobbsey Twins!) were looking for Nancy after seeing a tweet about the Aglaeca from the Drew Crew’s official Twitter account. (Bess had the bright idea to crowdsource their supernatural crisis, bless her heart.) As we would come to learn, the twins allegedly possessed a mirror capable of defeating the troublesome spirit, so the Crew had no choice but to track down Amanda’s missing twin. In a haunted forest. What could possibly go right?

The group’s search brought them to a hunting lodge, where they stumbled upon a shady meeting led by — you guessed it — Nancy’s secret grandfather! After narrowly escaping with their lives (thanks, Ryan!), the gang resumed their search, eventually finding Gil hiding from the forest’s dreaded Midnight Wraith in an abandoned bus. And when their collective positive thoughts fail to defeat the fear-loving wraith, Nancy resorted to plan B: light the damn thing on fire!

After a minor tussle with the authorities, Nancy was eventually released. (Thanks again, Ryan!) Her estranged father also handed over the mirror, which turned out to be much more than just a fancy piece of glass. Hidden beneath the surface was a cryptic message suggesting that the key to defeating the Aglaeca might be… musical? (Sea shanties, they’re not just for TikTok anymore!) 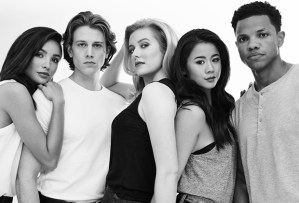 Below, executive producers Melinda Hsu Taylor and Noga Landau answer a few of TVLine’s burning questions about the new season:

TVLINE | As I’m sure you fondly remember, the show’s first season was cut short because of the pandemic. How did that affect where you ended things and where you chose to resume the story in Season 2?
Fortunately for us, Episode 18 served as a really great season finale, almost like we planned it — which we definitely did not. [Laughs] But we got to leave people on a great cliffhanger. During the months between the shutdown and when we resumed production, we were on Zoom with the writers figuring out how to move forward. We had four scripts ready to go, which were originally 119, 120, 121 and 122. But 119 didn’t feel like a season premiere, because it wasn’t designed to be one. So we put together what we call 118.5, which takes place in the six hours between the end of 118 and the beginning of 119. We picked up directly with Nancy and the Crew’s visions, and we inserted a new mystery to forward the supernatural investigation and introduce the Bobbsey Twins.

TVLINE | It definitely felt like no time had passed.
We love reminding people that the timeline of the show is very compressed. In Nancy’s world, it was only a week ago tops that she found out she’s Lucy Sable’s daughter. So we’re still in October 2019. And Season 2 only takes place over six weeks, so we will never get to the pandemic in Nancy Drew. We will never, ever have people in face masks on screen on Nancy Drew. (Editor’s note: Thank. Goodness.)

TVLINE | Nancy’s panic attack on the bus suggests that she’s experiencing a bit of an identity crisis. Is that something she’ll explore this season?
That’s really what the season is about for Nancy. It’s hard to be a 19-year-old anyway, figuring out who you are and what you want to do with your life. On top of everything else, she has to reckon with the fact that her parents basically kidnapped her and raised her as their own. And they didn’t tell her that she’s actually from a family of troublesome billionaires who sometimes murder people. She has to figure out who she is. And there’s a lot of nature vs. nurture conflict this season. She starts to worry that she’s more like the Hudsons, as opposed to the Drews, who were always her moral compass.

TVLINE | I also enjoyed Carson and Ryan’s little face-off. Should we expect more friction between them?
Yes, but they’ll also kind of form a bond over time, over the shared desire for Nancy’s wellbeing. I think the odd-couple nature of that relationship is so fun. You’ll see them get to their own détente over the first few episodes. Carson has a lot of atoning to do and wants to rebuild his relationship with Nancy, and Ryan needs a role model for how to be a dad and a grownup. The three of them are one of the most fun triangles on the show, Nancy is not having it from either.

TVLINE | Nick and George are clearly very nervous about telling Nancy that they’re together. Considering everything else she has going on, will she really care that much?
Well, it always stings when that happens. Something I love about our show is that the three girls are always very tight and loyal to one another. That makes it even more bittersweet that George is now the one falling in love with Nick. Nancy wants her friend to be happy, but it also hurts, and Nancy is the type of character who tries to bury that hurt. It will pop up later on in the season. We were just so excited to pursue this romance, which is something that never would have happened in the original canon.

What did you think of Wednesday’s premiere? And what are your hopes for Nancy Drew‘s second season in general? Grade the episode below, then drop a comment with more of your thoughts.