On the surface, Freeform’s popular coming-of-age comedy grown-ish could not be more different than HBO’s relationship romp Insecure. The distance between generations and life experiences are definitely significant.

But take a closer look at the way both examine friendship, romance and professional aspirations and listen to the music, you’ll find that these two series definitely share an orbit — and quite a few behind-the-scenes connections. While Insecure is returning later this year for a Season 5 that will be its last, grown-ish, a spinoff of black-ish, is kicking off the second half of Season 3 on Thursday. And with the right moves, it could occupy the vacancy in our hearts that Issa Rae’s Emmy-nominated show is creating.

“In many ways… there is a connection,” Yara Shahidi tells TVLine. (Shahidi stars as Zoey Johnson on grown-ish, which she also now executive-produces.) “Larry Wilmore, who helped set up black-ish, went over to help set up Insecure, and I can only begin to count the ways in which Issa Rae has knocked down doors. Not only by being a lead actress, but being a producer and a writer that has really helped blossom everyone’s opportunities from what she’s done and been able to achieve.”

Wade Allain-Marcus, who co-stars on Insecure as Derek, also writes for grown-ish and makes a guest appearance as Pastor Baby Boy in Episode 2, which airs Jan. 28.

“He is so funny,” Shahidi says of Allain-Marcus. “We feel lucky to have him in our writers’ room, [and] the same goes for every writer because they have so much happening and so many things that they’re involved in. It’s fun to get that kismet of having them all together.”

“It was so fitting and funny to see him in front of the camera,” Shahidi adds. “We already knew he was an incredible actor, but I think it’s really fun when you do see anybody who plays such an integral role behind the scenes, in front of the camera. It almost feels like an inside joke that people don’t realize how much this is like a family business.” 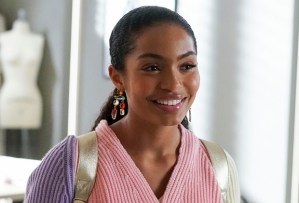 The cast and crew of grown-ish shot Season 3B in late 2019, before the COVID pandemic changed everything. So fans can expect to see a lot of crowd shots, no masks and no mention of quarantines. They’ll also see what happens between Zoey and Aaron (Trevor Jackson) after their kiss in the Season 3A finale, the future of Jazz (Chloe Bailey) and Doug’s (Diggy Simmons) relationship break and Nomi (Emily Arlook) as a mom.

That said, Shahidi and company are readying themselves for a Season 4 that will include COVID safety measures.

“Initially, this was supposed to come out this past summer as a kind of seamless continuation,” she says. “But I think fortunately, people are still excited after our long hiatus. We’re trying to be as COVID safe and responsible as possible. There are a lot of protocols in place, and unfortunately, L.A. isn’t doing really great right now in terms of COVID overall. We are waiting on the go-ahead because we’re dealing with a perpetually pushed start date.”

“But on the bright side,” Shahidi adds, “we’ve already started reading scripts… the preview I’ve gotten of Season 4 has been super exciting, and we’ll be on set in no time.”