The Wonderland Gang won’t be the only criminals Batwoman’s Ryan Wilder goes up against in Season 2 of The CW series. Ryan, who seeks justice after several of Alice’s cronies murdered her mom in cold blood, will also work to hold members of the Crows accountable for their actions.

In an exclusive sneak peek at Episode 2, Ryan finds herself being interrogated by Sophie about her potential involvement in a convenience store robbery. After surveillance footage clears her of the crime, she calls out the Crows for constantly pulling her in for questioning while Alice, a known murderer, continues to run amok.

“By my count, I’ve been brought up for questioning more times for stuff I didn’t do than an actual serial killer like Alice has been arrested for stuff she did,” Ryan says in the video. It’s clear Ryan and Sophie have some history together, and Ryan’s efforts to bring the Crows to justice have only just begun.

Season 1 revealed corruption within the organization through Reggie Harris, the innocent man framed for the murder of Luke’s father, Lucious Fox, by a group of Crow agents. The Crows also have assumed dangerous, almost authoritarian power over the city under Jacob Kane’s direction. Obsessed with bringing down Batwoman — an extension of his disdain for Batman — he has abused his power by using his Crows as a weapon against her. It’s a startlingly familiar image for those watching at home: Their story draws serious parallels to the real-world conversations about policing in America, and the Black Lives Matter movement which calls for police accountability and a reallocation of funds to social services.

As we saw in the Season 1 finale when Jacob Kane, caught on camera, ordered his Crows to open fire on Kate Kane’s Batwoman, there’s nothing really standing in their way. Ryan will take issue with the organization, which possess an uncomfortable stronghold over Gotham, and those who are a part of it. 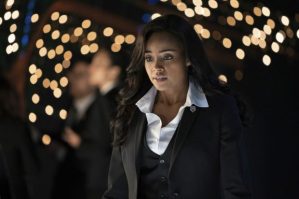 “I think at the end of the day, if you’re part of an institution that you know is not being held accountable for what’s wrong, are you a part of the problem? And that’s something that Ryan forces Sophie to really look at,” star Javicia Leslie tells TVLine. “Yeah, you say that you’re different, but are you really different when you know that there are people that you work with killing people and not being held accountable for those acts just because they’re considered police?”

Ryan and Sophie share a few commonalities: They’re both Black and lesbian, and they seek to protect the innocent. But with Sophie working for the Crows and Ryan firmly against what they currently stand for, these two won’t be working together so much as they’ll be butting heads this season.

Ryan also faces an uphill battle as the new Bat Team leader. With Mary and Luke focused on finding Kate, she’ll need to put her foot down in order to get her new crew to fall in line. “They become deferential to her, but there’s always that push and pull. Everyone has opinions in that Batcave,” showrunner Caroline Dries previously teased.