One Resident romance reached a major milestone on Tuesday’s episode… while another might be over before it even began.

We’ll start with the good news: Nic is pregnant! Just weeks after she and Conrad tied the knot, Nic is surprisingly expecting — and her pregnancy will “bring us to unexpected places” throughout Season 4, per co-showrunner Peter Elkoff.

“We had a lot of time, as the pandemic kept pushing our shooting date, and we were planning out the season for quite a while. We got farther along, in terms of how we saw the whole arc of the season, than we normally do,” Elkoff tells TVLine. “The decision to have her become pregnant in Episode 2 — besides giving the audience something to be excited and joyful about — was that it’s also a storyline that threads through the entire season. There’s a lot of drama surrounding the pregnancy, and it’s one of our big story engines for those two characters.”

Before you worry about a (baby) bumpy road ahead for Conrad and Nic, Elkoff is quick to assure us that the pair is “great and in love” in the wake of Nic’s big news, “but that doesn’t mean there isn’t conflict that the two of them have to face together.”

Some of that conflict will stem from Nic’s previous pregnancy with Conrad, which tragically ended in a miscarriage the first time she and Conrad were in a relationship. According to Elkoff, “there’s a lot of concern” weighing on the parents-to-be, “and they want to get to a place where they feel secure in talking about it.”

“That sense of fragility in her pregnancy is a fear,” the EP adds. “When you lose a baby, you think it can happen again. How do they handle that together?” 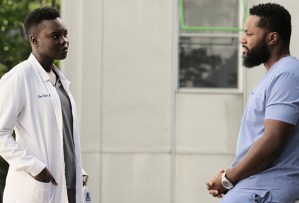 Meanwhile, Mina and Raptor’s nascent romance hit a snag very quickly in Tuesday’s hour. When the surgeons discovered that Dr. Cain had fabricated symptoms for one of his patients during the coronavirus pandemic, which led to that patient contracting COVID during an unnecessary visit to the operating room, Mina and Raptor had conflicting opinions on how to handle Cain. Mina insisted they report him; Raptor countered that Cain could still be redeemed. In the end, Mina told Cain’s patient about his malpractice anyway, and the patient plans to sue Chastain. Raptor, feeling disrespected by an unapologetic Mina, suggested they take a break from sleeping together, and Mina agreed.

“Nobody wants to watch a totally smooth romance. It gets boring,” Elkoff explains with a laugh. “They’re both such great characters, and they’re both so opinionated and so egotistical that it just seemed like a joke to tell a story between them where they didn’t butt heads about medicine.”

Though he won’t say much about where the doctors’ relationship will go in the wake of this disagreement, Elkoff confirms it will “leak into whatever level of romance may or may not occur between them,” adding, “it just seemed like the best version of a story for those characters, you know?”