NCIS resumed Season 18 this Tuesday night with two episodes — one that had a light, rom-com vibe, and one that… did not. When all was said and done, what’d you think about the reveal of why Gibbs shot McGee in this season’s cold open?

We are not here to recap this week’s first episode, delightful as it was, in which Tim and Delilah enjoyed their most fun together time in a while by helping crack a case during their Bahamian getaway. No, we are here to discuss the second hour, which leaped us forward three months, to the same timeline as the teaser that opened the season, where Gibbs for some reason shot at McGee from a sniper’s perch at an airport.

With Fornell still AWOL, Gibbs was fixing to amp up the investigation into the opioid ring led by the mysterious “Merriweather.” Vance, though, said that SECNAV had pulled the plug, and it would be the DEA’s case now. Desperate, Gibbs dashed off to the airport from Fornell’s photo, where he spotted a jet with Merriweather’s horse head logo. Seeing a man emerge from the jet, Gibbs tackled him — and it was Fornell! Starting with Fornell’s knee to Gibbs’ family jewels, a “fake fight” ensued (for the sake of the security cameras Tobias had set up). As they humorously traded wayward gunfire, Fornell explained that a big shipment was due soon, one that was somehow “different.” When Gibbs orders his friend to “read me in!,” Fornell told him to check his glove box in a few minutes.

Gibbs shows Vance was Tobias left for him — a glassine of opioids that are somehow “different” from the rest, and a very blurry photo of Merriweather. Vance says that his new priority is a report of a possible terrorist attack on a military base, but he gives Gibbs and his team 72 hours to do what they can do. Kasie works on enhancing the photo (which actually netted instant results, albeit in the form of a man with multiple names/passports), while Bishop and Torres looked into a petty officer who had gotten hooked on Vicodin and then began dealing for Merriweather, working out of a series of Beltway Burgers locations. They also learn that, curiously, the price on the new pills had been lowered from $20 each to just five dollars. But why?

Well, the PO in question turned up dead — not from the opiates in his system, but from a poison they had been laced with. So, Merriweather’s plan — the terrorist attack Vance had heard about — was to circulate the lethal pills via the Beltway Burgers that all neighbored military bases, targeting potentially thousands of officers. 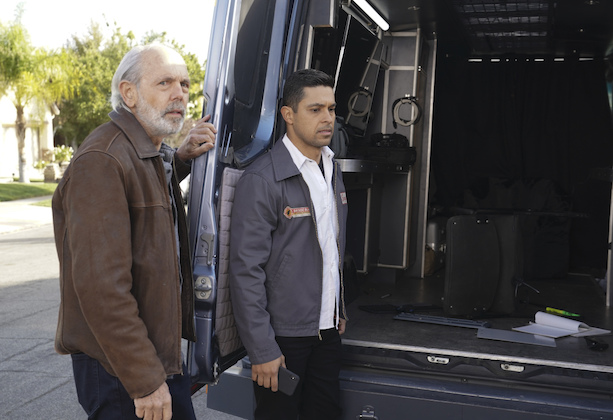 Sloane combs through the Beltway Burgers personnel files and finds that Fornell’s shift manager, greasy-haired “Chad,” is actually Vladimir Ivanov. Posing as an exterminator, Torres scouts out Vlad’s property, while Bishop runs comms from a van. When “Chad” confronts the bug man, Torres produces a work order from the HOA, while spotting Fornell inside the house. “Chad” is about to let Torres go when he gets a text warning him of surveillance. Vlad spins to shoot Torres in the back, but Fornell puts down the Russian first. Alas, Torres and Fornell then realize the bad guys have grabbed Bishop from the van.

After sending Fornell and Torres to scout out a warehouse that funnels the drugs, Gibbs takes a call from Merriweather, passing himself off as “Toby.” Merriweather wants to trade something G-man Toby wants, Bishop, for his right hand man Vladimir, whom he appears to think was merely arrested and not killed. “Toby” agrees to the trade in one hour, then ropes McGee into a plan in which a ballcap-wearing McGee will at least briefly pose as Fornell, while Gibbs sets up a sniper’s perch. But just as McGee drives onto the airstrip and cuts off the plane presumably carrying Merriweather and Bishop, his comms go out. As such, Vance and Gibbs are not able to alert him to new intel that the plane he is about to approach is rigged to explode.

It falls on Gibbs to stop Tim from nearing the plane — first with warning shots, which McGee assumes are from a baddie, and then with hits to his arm and his leg. McGee is down, yes, but saved from the fiery plane explosion that soon follows. Bishop meanwhile emerges from the hangar to reunite with/embrace Torres, having fought her way free of the goon who was guarding her. 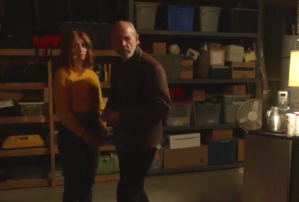 As for Merriweather? Tracking him (aka Alexi Myshkin) proved remarkably easy, seeing as he stayed in town for the 21st birthday party for his daughter, who had been helping him launder/hide his millions.

Later, while Fornell reunites with daughter Emily (who though peeved with his vanishing act gives him her six-month sobriety chip), Gibbs heads to the hospital to get an update from Delilah on Tim, who is out of surgery but not out of the woods (the leg shot hit a femoral artery). Gibbs starts to apologize/explain himself, but Delilah cuts him off, saying she knows he had no choice — and besides, “You saved Tim’s life.”

What did you think of the NCIS double header?