Not two weeks after its Netflix première (that is French for “premiere”), the mystery crime drama Lupin is on track to reach more households than recent buzzy fare such as Bridgerton and The Queen’s Gambit.

Created by George Kay and François Uzan and based on a character created by Maurice Leblanc, the French series is projected to be sampled by more than 70 million households* in its first four weeks of release.

*The numbers that Netflix reports are based on subscribers who have watched at least two minutes of a piece of content. 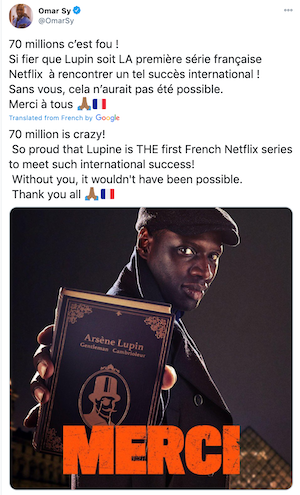 Lupin also has ranked No. 1 on Netflix’s consumer-facing Top 10 chart in dozens of countries including Brazil, Vietnam, Argentina, Germany, Italy, Spain, Poland, the Netherlands, the Philippines and Sweden. Its Metacritic rating is 85, while its Rotten Tomatoes freshness certification  is 93.

The premise for Lupin, which has only released the first half of its 10-episode season, is thus (aka “voila!”): As a teenager, Assane Diop’s life was turned upside down when his father died after being accused of a crime he didn’t commit. Twenty-five years later, Assane (played by Omar Sy) will use “Arsène Lupin, Gentleman Burglar” as his inspiration to avenge his father.

Sy celebrated the beaucoup viewership on Twitter, saying (translated), “70 million is crazy! So proud that Lupin is THE first French Netflix series to meet such international success! Without you, it wouldn’t have been possible. Thank you all.”