Judging from your response to the news that The Haves and the Have Nots is ending with the back half of Season 8, you’re no eagerer to say goodbye than Veronica Harrington has ever been to say something nice.

But if we must part ways with Tyler Perry’s trashtastic OWN soap — and it seems that we do — we’re going to need a few things to happen first, wouldn’t you agree? Read on to see what’s on our wish list, then hit the comments with the loose ends that you want to have tied up.

5. WYATT MUST DIE | Nothing personal. (OK, maybe a little; the character has always been a total tool.) But the show has played the “Is Wyatt a goner?” card way too often for him not to finally join sister Amanda in the hereafter. 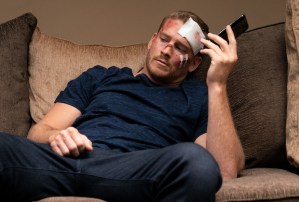 4. JUSTIN NEEDS TO GET HELP | As loathsome as Justin has been in the past, now that we know why he became the obsessive predator that he did, we’d rather see him get therapy and a boyfriend (looking at you, Colby) than watch him go up in flames.

3. THREE COUPLES SHOULD GET HAPPY ENDINGS | If you ask us, three couples are due some happiness: Jeffrey and Madison, Benny and Rianna, and Candace and Mitch. We know, we know, she’s still got it bad for the president-elect. But Mitch has always been there for her — and should be in the end.

2. THE VILLAINS HAVE GOTTA PAY… DEARLY | After eight seasons of getting away with murder — literally — the unholy trinity of Veronica, Jim and Katheryn have to get their comeuppance. Ideally, Veronica will wind up being blown to bits by the bombs that she’s earmarked for her family, and the estranged Cryers will get life behind bars — in adjacent cells. 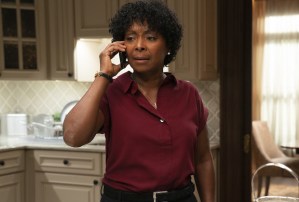 1. HANNA MUST STRIKE IT RICH | If our wish is granted and the Cryers get sent up the river, Hanna should continue to act as the executor of Katheryn’s estate — meaning that the housekeeper would never have to clean another toilet so long as she lived. Although, knowing Hanna and her love of being of use, she probably still would.

What do you think, HAHN fans? Are there any twists of plot that we missed that you’re dying to see play out before the show’s over? Hit the comments with your suggestions.