This week on The Good Doctor, Shaun weighs the pros and cons of having shower sex, and Lea reveals to her significant other a not-so-insignificant part of her past.

Let’s start with Lea. When Shaun returns home from work, he finds her building a piece of gym equipment. She tells him that she’s setting it up for the sole purpose of selling it. She got it 10 years ago. It was a gift from her ex-husband. (Wait, what?!)

“We got married, not for long, right out of high school,” Lea explains. “We grew up together, people expected it, it was a big mistake. We both realized it pretty quickly.”

Lea tells Shaun that she never discussed her ex-husband because she’s barely thought about him in years. He’s no longer important to her life — and that’s precisely the problem as far as Shaun is concerned. At one time, the “boy next door” was important enough to Lea that she chose to marry him. Now she barely thinks of him. This instills in Shaun a fear about their future together, and whether you can truly love someone for the rest of your life. Sudden change, he says, is unpredictable, like a hurricane. “Shaun, our relationship will not end in natural disaster,” Lea assures him — though it did begin in one, as Dr. Murphy points out.

Shaun’s uncertainty derives from his patient (Saving Hope‘s Benjamin Ayres), a Silicon Valley tycoon whose obsession with extending his life ends up costing him more than he anticipated. He modified his genetic code about six months ago, determined to live in some form or another for the next 1,000 years. (Yes, really.) So far, his wife has agreed to go along with him on this utterly ridiculous journey, but when he refuses to undergo a treatment to reverse the damage his genetic modification has done, she gives him an ultimatum: Live in the here and now, or go on with your dangerous mission alone. He says he loves her, but chooses immortality. What a putz! 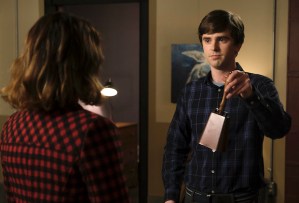 In addition to contending with the uncertainty principle, Shaun conducts a poll to see if others agree that shower sex with Lea would be dangerous/slippery/not worth the risk (as one does in their place of work). The majority rules in favor of shower sex, so Shaun heads back to the apartment, determined to do the deed. He also brings with him a cowbell. Not for the sex, but for Lea to ring if she ever feels that her and Shaun are drifting apart.

The other case of the week involves cancer survivor Hannah, played by How I Met Your Mother vet-turned-Hallmark Channel queen Ashley Williams. One year after she beat breast cancer, and six years after she beat skin cancer, she comes to the ER for a hematoma and discovers she now has thyroid cancer. Her recurring cancers turn out to be the result of Li-Fraumeni syndrome (or LFS), an inherited familial predisposition to a wide range of certain, often rare, cancers. (Tragic, right?) Hannah’s venture capitalist Allen (played by fellow Hallmark vet Matthew MacCaull) has been her rock, but he’s not sure that he’s strong enough to go through this again — and that’s before he’s made aware of Hannah’s LFS diagnosis. Worried that the added stress will contribute to Hannah’s deteriorating health, Claire advises Allen to end his marriage if he feels he’s not up to the challenge. But in the end, Allen decides to quit his job and care for his wife. 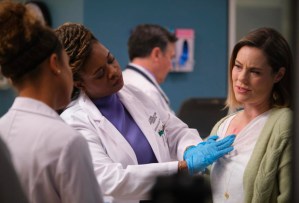 Early on in Hannah’s case, Jordan learns that Allen is a venture capitalist and gets his business card. She’s prepared to pitch him her custom-made insoles, and turns to Olivia for a testimonial. When Olivia implies that Jordan should be laser-focused on her residency, rather than devote part of her time to a side business, Jordan defends herself. In the process, we learn more of her backstory. She tells Olivia that she grew up with five brothers, and she’s been taking care of people her entire life. Part of the reason she became a doctor is so she could get paid for patching people up, and she’s not going to feel bad for trying to make a little money on the side. Olivia sorta apologizes when she goes to Jordan and tells her she’s sorry that her VC has left the biz, and takes her up on her offer for the size 7 insoles.

Meanwhile, Claire this week has to decide whether to accept a coffee date with Jordan and Olivia’s fellow intern, the polyamorous Enrique. He swears it’s not a date, but Morgan’s right: it’s totally a date. Claire eventually takes him up on his not-a-date offer, which entails sipping coffee in the hospital parking lot, where he’s currently living out of his van. (Every woman’s dream!) Later on, she tells him that they’ll remain friends and friends only — and, to be quite honest, I’d prefer if The Good Doctor never revisits this potential pairing again. If it wasn’t appropriate when Melendez took an interest in Claire, it wouldn’t be appropriate for Claire to take an interest in Enrique. 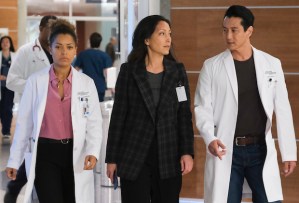 Hopefully, Dr. Browne will be too preoccupied with Lim’s downward spiral to focus on her own love life for a while. Following last week’s accident, Lim lies to Claire and the other fourth years when she tells them she sold her Ducati and bought a Subaru. As for the gigantic bump on her head, she chalks it up to a run-in with her kitchen cupboard. But upon her arrival for ladies’ night, Claire finds the chief of surgery’s totaled motorcycle hidden behind her new car.

OK, now it’s your turn: What did you think of The Good Doctor Season 4, Episode 7? Do you buy that Lea had an ex-husband that she kept secret from Shaun for the last three-and-a-half years? And how do you feel about a potential romance between Claire and Enrique?