This Sunday’s episode of NCIS: Los Angeles by and large wrapped up the “superbills” counterfeiting case, but in retrospect saved its very biggest moments — and there were several — for the final minutes.

Let’s start on the brighter side of things: Deeks, while concealing a possibly broken rib, called Kensi to share his fare that he had “washed out” at FLETC. But once he got back to HQ, Hetty (who Kilbride told us was on an op that had “hit a snag”) Skyped in to invite him to open the top drawer of his old desk. Inside, no surprise, was his NCIS badge. And though they will hold off on a team-wide celebration until Callen gets back, Kensi says the night is free for them to celebrate by themselves — once Deeks fesses up to his injury, whoops.

So, where was Callen? As teased at the top of the episode, he had plans to propose to longtime love Anna. And he aimed to do that by surprising her at the motel where she has been staying, while participating in the Rebuild U.S. project to help a community that had been devastated by the one-two punch of wildfires and COVID. Yet when Callen shows up at the front desk to ask what room Anna is in, the manager says that the motel is actually completely empty. But what about all the volunteers who were staying there with the Rebuild U.S. project…?

What rebuild project?, the puzzled manager asked, making clear that Anna had told her boyfriend quite a whopper. 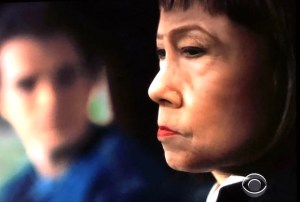 Anyways… speaking of Callen, in the build-up to his would-be proposal, he twice flashed back to his younger self (played by Johnny Jay Lee). In the first flashback, we saw Young Callen enamored with a young woman named Jocelyn — and she, him. But in the second flashback, to the heartbreaking moment when Callen left Jocelyn and that normal life behind in order to get answers about his identity/past, he hopped into the back seat of a car, where a Younger Hetty questioned his final decision. It was clearly Linda Hunt’s voice, but Hetty herself, when glimpsed, was some combination of another actress and or CGI and or practical prosthetics/wigging. 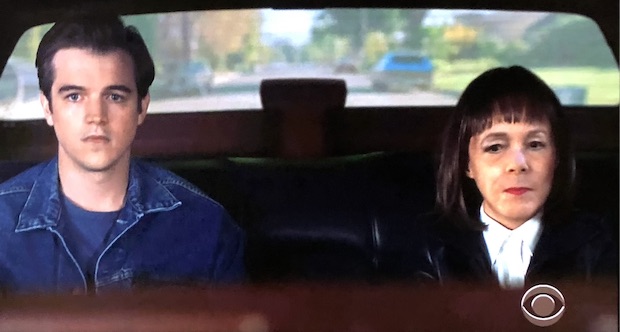 But wait, there’s more! Because in addition to Deeks’ very good news and the gut punch Callen suffered, there was a tiny bit of business with Sam’s daughter Kamran — who after a quick call with her dad, got sneaked up on in a parking garage, grabbed and dragged away by a masked man.

What did you think of NCIS: LA‘s many twists this week?