We’ve got a lot of Servant questions. Like, was the Turners’ baby really Jericho? Why can’t Sean and Julian stop lying? And is the creepy doll actually a poltergeist from hell? Hey, on this show, anything’s possible.

Season 2 of the psychological horror series premiered Friday on Apple TV+, and as you probably could’ve guessed, we didn’t exactly get the answers we’ve been craving. With Jericho (or whoever) gone missing, Dorothy and Sean are in panic mode, as nanny Leanne — who may or may not have supernatural powers that possibly revived Jericho — remains on the lam, too. (Sound crazy? Oh, it is.) Dorothy, however, remained hopeful, devising a 72-hour game plan she hoped would guide her to the truth… which, of course, she may not even be able to accept. Despite her laser focus, Sean and Julian continued prolonging a whole mess of lies and ethical problems for the Turners, as the couple remained desperate to reunite their family and quell their pain.

Here, TVLine talks to Lauren Ambrose, who plays Dorothy, about the season’s tense premiere, the couple’s refusal to grieve and why Dorothy’s delusions have made her a “woman on a mission.”

TVLINE | Before we dive into the premiere, what drew you to this project, and what was your first impression of the scripts you read?
I thought it was a very strange premise and a fascinating character… a tragic character. She’s got so much going on. She’s hiding so much and broadcasting so much and wearing this crazy mask and refusing to look at reality. I was like, “Wow, I have no idea how to do that. That’ll be a challenge.” It’s a thriller, too, [and] I’ve never been in a thriller or a scary thing before. M. Night Shyamalan was in charge, so that seemed like good hands to be in. At the time, I was doing My Fair Lady on Broadway, and this was the polar opposite.

TVLINE | Considering that Dorothy’s version of the truth is very questionable, how do you approach playing such a traumatized, damaged character?
The job is to make the scene work. Someone who is delusional, they’re not delusional to them, they’re only delusional to the outside world. So as long as I have conviction in my actions and beliefs as the character, then I’m doing my job. Everybody else is going, “Oh my God, what are we going to do about this woman, she’s bananas, she thinks that doll is real,” and I’m there bouncing the dolly on my lap like, “What’s everybody’s problem? Why are you treating me like I’m nuts? There’s no problem here!”

TVLINE | With Jericho missing in the Season 2 opener, Natalie tells Sean and Julian that it’s a chance to finally let Dorothy grieve, but is it too late for them to back their way out of this whole thing?
There’s this deep web of lies at this point that they’re all wrapped into and invested in. I don’t know what they should do, but they continue to go along with it. That’s what’s interesting about this show: It explores these big feelings and ideas of what it is to be honest in a relationship, and the vulnerability of being a parent for the first time. And you can explore these ideas through the genre in a really different way. It reaches the pit of your stomach because these are all things we work on all day long as humans. But to explore it with this kind of storytelling is really fascinating to me. 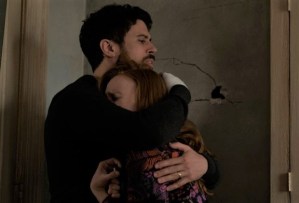 TVLINE | Dorothy and Sean get into a huge fight, and she tells him, “I thought you’d be a better father than this.” Why does she come down so hard on him at that moment?
He’s in the midst of doubting his actions and [questioning] if she should be telling the truth or involving the police, or if he should be giving up this ruse that he and Rupert [Grint]’s character have been perpetuating with all these lies and problems. We turn away from the fragile vulnerability of “What’s going to happen? Is she going to wake up and recognize what happened?” Now she’s like Denzel! She’s a woman on a mission! “I’m getting my baby back, no matter what.” She’s problem-solving, and they just aren’t sure what to do. They’re sort of half-heartedly trying to figure it out, but mostly trying to cover up whatever wrong they’ve done. It’s very complicated. There are so many layers.

Maybe this couple’s real problem is that they refuse to grieve. Dorothy is doing it in this very big and cuckoo way, and Sean is doing it as well by perpetuating the story. Maybe she’s criticizing him in that moment on a deeper, unconscious level for the lies and for not facing the reality of it or helping her face the reality of it.

TVLINE | Julian anonymously sends Dorothy a baby bootie with a message that reads, “Tell no one. Baby lives.” Why give Dorothy false hope when she’s already been through so much pain?
I think it’s actually to assuage her pain, and to say that there’s something to live for. That they’re going to find the baby and figure it all out together. There’s hope. But are the lies we tell each other good for our relationships or bad?

TVLINE | Sean not only finds the discarded doll, but brings it inside and gives it a bath. What’s your take on that?
It’s a really interesting storyline for Sean’s character because he ends up having this faith crisis, which I think is such a beautiful story. He’s starting to believe and he’s starting to come around to this faith in something, something bigger than him and bigger than reality. So much of this show is about what lies between perception and reality, and whoever’s looking at the problem might see it in a different way, depending on how you’re bent and the way your mind thinks. You might see something that’s happening on the show as a miracle or supernatural phenomenon, or a coincidence, a very practical reason why the doors of the attic slam closed or whatever. I think Sean is coming around to having this opening of faith led by his wife’s conviction that they’re going to find this baby. He sort of doesn’t care who the baby is anymore. At this point, there was a real baby, and he wants that feeling back. He wants his family back. Maybe there’s an opportunity for that through some kind of magical, spiritual thing… through healing. I don’t know, I could be wrong, too! I’m sure the internet will have all kinds of other ideas!

TVLINE | Oh, they do! Can you give us a little tease about what’s in store for Dorothy this season?
With Dorothy, we turn away from “Is she going to wake up, and is the baby real?” At the end of Season 1, she sees the doll for what it is, and doesn’t accept it as her baby anymore. Now it’s like, “Who put this doll here? Where’s my baby?” Now she has a very practical problem, and it takes a darker, more supernatural turn at times, and definitely leans into the horror. For me, I had some really wild acting challenges. [M.] Night [Shyamalan] directs Episode 4, and that was a really wild episode that I read right before bed — I definitely shouldn’t have done that! That was one that really scared me. There’s a really cool face-off. Leanne and Dorothy have to work out their differences, and it’s a battle of wills: teenage power vs. maternal rage.

There were definitely times when I was like, “How do I maintain sympathy for this character with what she does?” Ultimately, I always come back to: She will do anything to save her child or get her child back, and that she is a good mother, despite all of her varied flaws.