Superstore‘s final season resumes Thursday (at a new time, 8:30/7:30c) with an episode that tackles systemic racism. It all begins when Cloud 9 changes its policy of locking up Black haircare products, which begets a larger conversation guided by Garrett.

“Garrett thinks it’s too little, too late,” portrayer Colton Dunn tells TVLine of Cloud 9’s policy change. “Although you want to applaud all corporations for taking any steps that they take, you have to find humor in how small these steps tend to be [when you consider] how much power these corporations have.”

After Garrett explains to Dina that this one small gesture doesn’t put an end to racism at the store, the acting manager puts him in charge of holding a staff meeting and compiling a list of issues that corporate needs to address. It’s the sort of leadership task that Garrett has always tried his best to avoid.

“I don’t think Garrett ever likes to take the lead on anything,” Dunn says with a laugh. “But I think like a lot of people throughout these crazy times have felt like ‘What can I do?’ You look at what’s going on around you, and you want to make a change, and you’ve got to be the one to do it. So he’s willing to give it a shot. Whether it works out or not, we’ll see in the episode, but it’s fun to see Garrett step up to the plate and give it the old college try. It really hurts him to get out of his comfort zone, but I think when he does, he could be a good leader.” 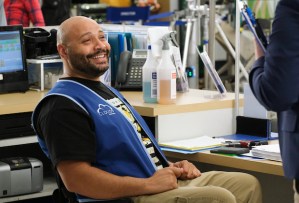 Along the way, he’ll be forced to deal with constant interruptions by Glenn, who attempts to right Cloud 9’s wrongs while he’s stuck at home in self-isolation. “He’s doing it a very Glenn [way],” Dunn teases. “He’s like a lot of people in the world: they go about their day every day, and they don’t think a bad thing about anybody. [But] everybody wants to be able to do more, and I think that’s where Glenn is. He just has no idea how to fix this kind of problem, or even really what the problem is, so you’ll see how Glenn [tries to] ‘deliver’ respect and show admiration for the Black community of Cloud 9.”

Then there’s Jonah, who struggles to de-center himself from the conversation. “Jonah wants to be as woke as possible at all times,” Dunn says. “So in this situation, when we’re faced with a cultural struggle, it seemingly would be the perfect place for him to step right in. But one of the lessons he’s learning in his journey of becoming more enlightened is that stepping right in and, you know, ‘white knighting,’ is exactly what people don’t want. Now’s a good time to listen. There are so many moments in this episode where Jonah could quote a book or an article or a podcast, but he’s got to be quiet and keep his mouth shut, and try his best to just support the people of color.” Watch an exclusive sneak peek below:

When asked to reflect on NBC’s recent announcement that Superstore would end after six seasons, Dunn sounds more grateful than anything else. “We did 100+ episodes, which is just not something that you see these days,” he says. As for whether he expects to see America Ferrera reprise her role as Amy for the series finale, he remains coy. “I don’t know, man, but I’m sure that the writers are trying to cook up something so we can make sure that these characters’ stories finish the right way.”

Will you be tuning in for Superstore‘s first episode of the new year? And what are your hopes for the remainder of Season 6?