Warning: The following contains spoilers for Wednesday’s Chicago Med. Proceed at your own risk!

It might not have been a kiss on the lips, but Chicago Med‘s Natalie and Crockett took a small yet significant step forward in their relationship during Wednesday’s episode. At the close of the hour, during which Crockett treated a former fling who was now getting married, Natalie joined her colleague on the hospital’s roof.

“Tell me something: Why do you do it… the one-night stands?” Natalie asked. When he didn’t immediately respond, she noted that they all end up with him alone. As Crockett remained silent, Natalie added, “Or maybe that’s the point.” She then placed a comforting hand on Crockett’s shoulder, followed by a soft, meaningful kiss on his back, before walking away.

Below, executive producers Diane Frolov and Andrew Schneider talk about the non-sexual moment of intimacy and how the docs will respond to it.

TVLINE | What does that final moment mean for Natalie and Crockett? What motivated Natalie to do something that intimate?
DIANE FROLOV | Well, a few things: her realization of how lonely the guy is, and a bit of that realization came from the other story, when she’s talking to the telemedicine woman. So she picks up on that longing, and she sees that in Crockett, and this way that he keeps people at a distance from him. Her gesture is one of saying, “I really do care about you.”
ANDREW SCHNEIDER | And she’s the only person in the ED that knows he lost a child. So she knows that this guy is not just this easy, breezy Cajun. He has a very deep side to him, and there’s a well of pain.

TVLINE | I found the kiss on his back to be so subtle, but intimate. Was there some debate about what exactly Natalie should do in that moment? How far it should go?
FROLOV | Yes. [Laughs]
SCHNEIDER | We wanted it to be intimate, but not sexual. And we thought it was very well realized. It’s tender. 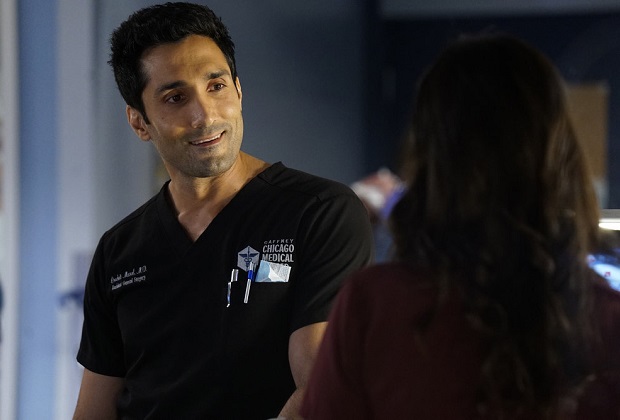 TVLINE | How are they processing that moment moving forward? Where are they at in the following episode?
FROLOV | They’re going to be a little awkward at first with one another, because there was that intimacy between them, and they’re not really sure what it means. I would say the next episode is really exploring that, and then coming to the realization of what it means.
SCHNEIDER | It gets deep.

TVLINE | How might Will react to Natalie moving on with Crockett? Is that something we will see?
SCHNEIDER | He tries to be a grown-up. He tries, but he can never quite get over that relationship. It was a very potent, deep relationship, and even though he was the one who last rejected Natalie, those feelings never go away.

TVLINE | We’re going to be meeting Crockett’s ex-wife. What kind of insight is that going to give us into Crockett?
SCHNEIDER | What it will really serve to do is illuminate Crockett’s past, what’s driven him, his childhood even… This is really for Natalie. It becomes a story for Natalie, about who this guy is and what he has gone through in his life.

Med fans, what did you think of the Natalie/Crockett exchange? Hit the comments with your thoughts!