It is almost time to turn on the WandaVision, with Disney+‘s first live-action Marvel series set to premiere this Friday, Jan. 15. And when it does arrive, it will not be all nine episodes at once, but instead a Mandalorian-like weekly rollout.

“We had discussions about [dropping the season all at once],” Marvel Studios president Kevin Feige tells TVLine, “but everybody at Disney+ had decided — and we very much agreed with — the notion of the fun of week-to-week.”

To be exact, WandaVision (which stars MCU vets Elizabeth Olsen and Paul Bettany as Wanda Maximoff and Vision) will launch with its first two episodes, before going to a once-a-week schedule.

“The Mandalorian has certainly proven this — there’s something fun to be able to follow along, to try to guess what happens next, to have a week speculating or rewatching and building that anticipation,” Feige notes. “Part of the fun, to me, of movies, is the anticipation leading up to it, so it’s fun to get to have a ‘mini-version’ of that every week. And we did build the stories with that in mind, on all of our series.”

“With that said, I think it’ll be another experience — an equally fun experience — to binge them once they’re all available,” Feige adds.

Disney+’s other live-action Marvel series in the pipeline include (but are by no means limited to) Falcon and the Winter Soldier (premiering March 19) and Loki (which is penciled in for May). 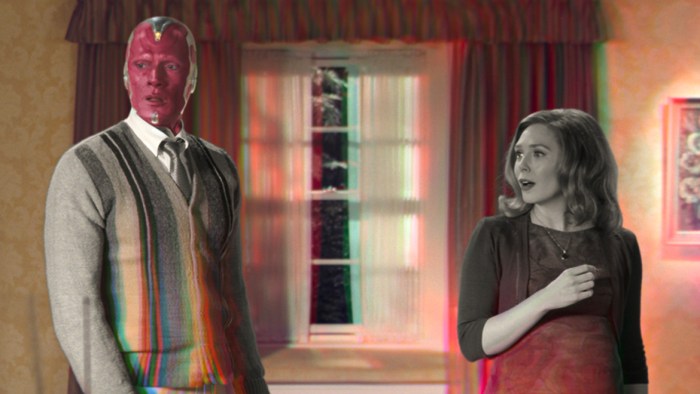 Feige also cleared the air for us on WandaVision episode lengths, seeing as the first three episodes screened by the press on Friday all hovered around a half-hour, which frankly makes sense given the way the titular characters’ life is presented via fantastically faithful homages to sitcoms from the 1950s, ’60s and ’70s.

Once the series begins to break away from that creative construct, as the close of Episode 3 most strongly suggests, running times “start to vary more, yes,” Feige assures TVLine.

“That’s one of the fun things about streaming — and even on the shows that I watch, as a fan: You don’t have the rules of network TV and selling ad time, where it has to start now and end now. [Episodes] can grow or shift or shrink or expand to fit the story you’re telling. Even in those first three, the lengths are somewhat different, and that will continue through the rest of the show.” (With reporting by Rebecca Iannucci)