THE PERFORMANCE | It is an odd yet factual testament to Jackson’s performance to say that if you have ever personally lost someone — and I don’t necessarily mean in death — to Alzheimer’s, Elizabeth Is Missing was hard to watch.

And yet by so accurately depicting the symptoms of the horrendous disease, she pulled you in, deep, to Maud Horsham’s story and made you, perhaps foolishly, root for this intrepid and very unlikely “investigator.”

I lost my father to Alzheimer’s in May 2007, at age 80. One of my sisters lived near his nursing home, so she saw him most often and I heard tell of his behavior. But I also experienced it in person, especially near the end. Glenda Jackson, at 84, likely has witnessed Alzheimer’s in others as well, but no matter her experiences she remarkably captured the disease’s “highs” and lows — from the increasingly infrequent flashes of lucidity that give a family member relief (if not hope) to the frightful outbursts directed at the undeserving.

Jackson’s ability to do that was a bit… unnerving? You almost wondered for her own well-being, the portrayal so precise. You cheered when Maud seemed to make progress in the search for her friend Elizabeth, rifling through the myriad notes she scribbled to herself. You wept when Maud banged at the locked-from-the-outside door that imprisoned her inside her own home, for her own good. You leaned in when Maud revisited the long-ago case of her disappeared sister. And you gasped at the biggest gut-punch, when Maud failed to recognize the daughter she was just talking to.

Once the mystery of Elizabeth was solved — for us, and for Maud — Jackson… well, she went all in. I tear up writing about the emotions she cycled through as much as I did when watching it. A two-time Oscar winner, Jackson earned both a BAFTA Award and an International Emmy for the role (which aired in the UK over a year ago), and inarguably she wowed the Stateside crowd as well. — Matt Webb Mitovich 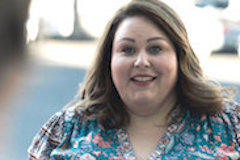 HONORABLE MENTION | Is it weird to be proud of a fictional character? Eh, who cares? We’re bursting with pride over Kate’s speech on This Is Us, and Chrissy Metz deserves all of the credit. Kate’s confrontation with abusive ex-boyfriend Marc gave Metz a showcase to express all of the hurt feelings her character has carried for decades — and how far Kate has come since she was 18. For us, the pinnacle of the performance was when Metz stood tall before the man who called Kate “broken,” and served him some hard truth. With a clear, strong voice and a certainty that was hard-won for the character, Metz simply informed Marc that he, not she, was damaged, and she’d done just fine for herself in spite of their time together. Here’s hoping for more of an upswing for Kate: Triumph looks good on Metz. 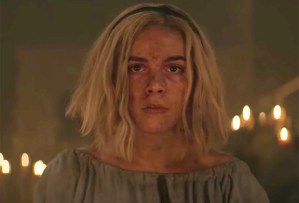 HONORABLE MENTION | Chilling Adventures of Sabrina’s final eight episodes threw everything and the enchanted kitchen sink at the its titular teenage witch, and star Kiernan Shipka was game for absolutely every second of the madness. And while the supernatural drama’s series finale may have left some fans divided (click here to read all about it!), Shipka’s commitment in the show’s final hour (“Chapter Thirty-Six: At the Mountains of Madness”) was undeniable. From dying in her own arms (a feat!) to those final scenes opposite Father Blackwood, Shipka was in rare form, reminding us that she’s always been the heart at the center of this insane little show. 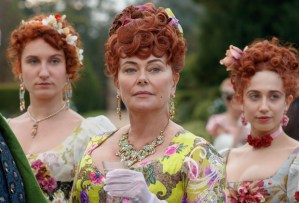 HONORABLE MENTION | Polly Walker is no stranger to playing complicated villains, but the Shakespearean-trained Rome vet upped her game in Netflix’s Bridgerton — and that was especially true in the season finale, when Baroness Portia Featherington was reduced to groveling for invitations to a ball. When the obnoxiously ambitious social climber sauntered up to Duchess Daphne and her mother, she played on their sympathy by nervously fidgeting with a ring on one of her satin-gloved hands like a precocious girl twirling a curl and begging for a lolly. “It will certainly be the event of the season,” Portia inferred, Walker infusing the words with passive aggression. Walker also brought physical comedy to the scene by subtly elbowing Mrs. Varley to cosign her pleas. Later, when Portia was forced to navigate an emotional, financial rollercoaster, Walker masterfully engendered both empathy and disdain as an entitled woman who is merely human.