Katherine McNamara appears as Julie Lawry in one single scene during The Stand‘s fourth episode, and she makes quite an impression — though not necessarily a good one.

Julie arrives near the end of Thursday’s installment, appearing in a flashback to Nick Andros’ (Henry Zaga) and Tom Cullen’s (Brad William Henke) journey to Hemingford Home in Colorado. While resting and picking up supplies in an abandoned warehouse, the men encounter Julie, who’s donning a party dress and jewelry… and aiming her shotgun right at Nick. (Her first words: “You dangerous?”)

Throughout the next five minutes, Julie 1) decides Nick is not only harmless, but also quite attractive, and attempts to sleep with him, 2) gets interrupted by Tom, whose developmental disabilities she quickly mocks, and 3) angrily shoots at Nick and Tom when they don’t agree to let her join their journey.

Needless to say, Julie’s a far cry from Clary Fray or Mia Smoak, the respective Shadowhunters and Arrowverse characters for which McNamara has become known. Below, the actress explains why The Stand‘s Julie was such an appealing departure for her, along with a few teasers of Julie’s forthcoming devotion to the sinister Randall Flagg.

TVLINE | The Stand‘s cast is big, and quite stacked, at that. How did you come to be involved?
I’ve known about this project for a really long time, and being a huge Stephen King fan, I was excited to be a part of it in any way. I’ve known [series co-creator] Josh Boone for years… and we both have been sharing our love of Stephen King for a long time. [Laughs] But getting to play Julie — it’s such a fascinating character for me, and a fun challenge, given that I’ve been playing heroes for the last several years. Getting to dive into a character who’s a bit more villainous — it was a treat to get to play with a different set of colors.

TVLINE | Was this kind of role something you were actively seeking out, after Shadowhunters and Arrow? Something totally different?
When I first started in this industry, I made a promise to myself that I would never just end up doing one thing. That’s the joy of being an actor. It was a thrill to get to do this, and that first day on set — [Julie] literally comes in guns blazing, and that’s the only script I had at that point. Diving into set, I knew they had been in production for a few months, but Brad and Henry and the rest of the crew welcomed me with open arms. I was instantly put at ease by everyone’s willingness to play, and to really commit to this world that Stephen King created. It’s been exciting since Day One, and it’s been creative soul food for me, as an actor. 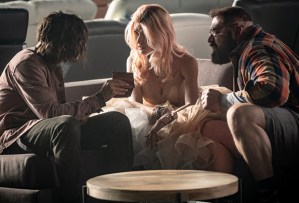 TVLINE | Tell me a little bit about filming Julie’s entrance. She says a few words in her first scene — the R-word, among others — that you don’t expect to hear anymore. Did you have any difficulty getting through those parts of the script?
I did. When you have source material like Stephen King, you don’t really have a choice in the matter. But ultimately, I want people to see Julie as the person not to emulate in the apocalypse. [Laughs] The example of what not to do. But she’s a survivor, and she’s been through a lot, and she makes a lot of difficult choices. She doesn’t always make the right choice, but she’s seeking out a home and a place to be loved. But yes, you have to set your own personal humanity aside, because you’re on set, and you go, “What’s the character choice here that makes me feel like the worst possible, grossest human being?” And that’s the right choice.

TVLINE | We only get a short introduction to Julie in Episode 4, but we know from the book that she reappears. What can you tease about those later episodes?
Ultimately, Julie fashions herself as this phoenix rising from the ashes. She spent her whole life dreaming of what she considers to be prosperity — the finer things in life — and with this apocalypse, she sees an opportunity to take it. And while she’s seeking this home and a place of belonging, that’s the seduction of Randall Flagg that draws her into this world of Vegas. And we really get to see her flourish in the darkest of ways as the story moves forward.

It’s interesting to see her character develop, because that was one of the biggest joys of this production: They allowed us to have the things we found on set, and the relationships we built on set, inform the future episodes. The things we were doing on set were very much playing into [how the scripts developed]. When you have a group of actors that’s as enthusiastic and as willing to play as these actors are, we just found so many colors of these incredibly rich characters we were given.

TVLINE | I mean this with no disrespect to Julie, but she seems like the kind of person who would enjoy Randall Flagg’s attention.
Very much so. That’s something we find as the story goes on. She’s very much a survivor, and she is determined. She’s willing to do whatever she has to do in order to climb that ladder. But she also has this reverent worship for Randall Flagg, like we see with evil cult leaders. He has this way of making these characters feel like they’re important, and they belong, and they matter, in ways that they never have felt from anyone else in their existence. It’s very seductive, and it’s very alluring. And there’s no one more charismatic than Alexander Skarsgard as Randall Flagg. [Laughs] It was definitely a treat.