NBC — somewhat unexpectedly, in these trying times — looks to mine politics for laughs with Mr. Mayor, the newest sitcom from Unbreakable Kimmy Schmidt creators Tiny Fey and Robert Carlock.

The series, which will premiere two back-to-back episodes tonight at 8/7c, follows Neil Bremer (played by Ted Danson), a wealthy businessman who runs for mayor of Los Angeles “for all of the wrong reasons,” according to the show’s official description. After an unexpected win, he must now figure out what exactly he stands for while also earning the respect of his staff, connecting with his teenage daughter and embracing his newfound responsibilities — such as controlling the coyote population.

It’s a tall order for the unqualified politician, who will lean on the talented young individuals around him. That includes Mikaela, a PR maverick played by Crazy Ex-Girlfriend alum Vella Lovell. Mikaela, who didn’t think Bremer would win, now finds herself in over her head as his newly appointed Chief of Staff.

The series comes at a time when politics are, to say the least, the most divisive they’ve been in recent memory. Lovell admitted that she had some reservations about doing a politically centered sitcom given the current real-world climate, but she hopes the show will be a much-needed escape for those looking for a good laugh.

In a conversation with TVLine, Lovell opened up about how Mr. Mayor is handling current events, what it’s been like to film in a pandemic, and why she finds outspoken leaders like Congresswoman Alexandria Ocasio-Cortez inspiring. 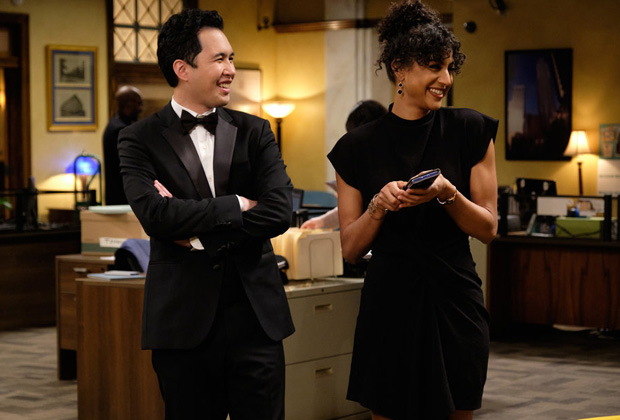 TVLINE | One of the first things I noticed was this amazing cast: You, Ted Danson, Holly Hunter, Bobby Moynihan, Kyla Kennedy. Did that at all influence your desire to be a part of this project?
You start with Tina [Fey] and Robert [Carlock] and you’re like, “OK, this is probably going to be really funny and really good.” Add Ted, Bobby and Holly, who is an Oscar winner, and you’re just like, “This will be great. I’ll definitely put my hat in the ring.” It’s been crazy and kind of wild that I get to work with all these people — and that they’re really good people, too. They’re good human beings, and I feel like that’s rare.

TVLINE | You’re filming this show in a pandemic, which can’t be easy. What has that experience been like for you, and how has that affected your relationship with your co-stars?
We, as a cast, stayed in touch through the pandemic; we would Zoom every few weeks. We had only shot maybe three weeks when we got shut down and we were just getting to know each other. We all kept in touch and had this shortcut to each other because when we got back to work during a pandemic — we’re all in masks and shields and getting tested for COVID every day and temperature checks — I feel like I know the cast really well now. We’ve all had to adjust. All of a sudden, you’re Zooming with your friends and you haven’t seen them and your family — but I think in some ways, it can bring you closer to people. I think that happened with us, which I wasn’t expecting, especially with people like Holly and Ted. You’re not expecting them to be like, “You guys want to hang out?” That was a really pleasant surprise.

TVLINE | The show is set in politics at a time when things are pretty divisive. Were you at all concerned about joining a show centered around politics given the current landscape?
During the pandemic, I was like, “How are we going to do this, because politics are not funny right now?” Especially with Black Lives Matter protests, it was like, how are we going to do this? But I think they handled it really well. It was also such a good refocusing for me, when we got back to filming, to remember the main point of this is to make people laugh. It’s supposed to entertain, and it’s supposed to be silly and zany. The backdrop is politics, but this isn’t the next West Wing or anything. This is using politics as a platform to be able to talk about a lot of different aspects and possibly have some heart in there, but the goal is to make people laugh. I think if it was a political show that was trying to be really serious right now, it would be really intense. But being a part of a show that is trying to give relief and give people a little escape for 30 minutes a week, I can get behind that. I know I need that and I think, collectively, we could use that as a people.

TVLINE | And I think it helps that in this show, at least everyone is trying to be better and do better.
Hopefully. We’re framed in a post-COVID world and Tina and Robert are so smart, they’re not going into it trying to act like this didn’t happen. They’re using it as a way to frame all of these zany characters that are actually trying to help people and trying to do good, and they’re trying to do better. As much of a mirror as it is, I think it’s also a total escape.

TVLINE | Ted Danson is a dream, and seeing you in fabulous clothing is also a dream. Your fashion game in this show is so on point.
Right?! I was shocked. Especially because the last show I was on, I had a really fun wardrobe as well, but I was in a lot of midriffs and grungy jean shorts and stuff. For my first costume fitting, I was like, “OK, we’re stepping it up here.” Honestly, I’m not mad about anything I got to wear. Every day is really exciting. I’m not great at walking in heels but I think I’m getting better, especially the first day back when I had just been wearing socks for nine months and all of a sudden, I was in some high heels. I was like, “Oh, this is really hard.” I love all of our costumes. They’re very true to everyone’s character and the details are awesome.

TVLINE | Mikaela is such a different character than Heather, who you played in Crazy Ex-Girlfriend. Whereas Heather was so reluctant to step into her power, Mikaela seems to be a very ambitious go-getter from the jump. What has been the most exciting thing for you about playing this new character?
For me, they’re similar at their cores, which I think is that they have a lot of heart. They want to do good but it comes across in different ways. With Heather, she was scared of failing so she just didn’t try. With Mikaela, especially stepping into politics which she’s never done before, she’s kind of the cart before the horse. She’s in really deep water and she has no idea what she’s doing but she doesn’t want to act like she doesn’t know what she’s doing. There’s a lot of posing and acting like she knows but she’s totally out of her element. So I would say Mikaela just runs like 10 steps ahead of where she is, whereas Heather 10 steps behind.

TVLINE | Mikaela mentions that one of her feminist icons is Katniss Everdeen. Who are some of your favorite feminist icons in real life?
I’m obsessed with Roxane Gay. I think she’s incredible and I just subscribed to her newsletter. Michelle Obama is amazing. I think AOC [Congresswoman Alexandria Ocasio-Cortez] is such an inspiration in terms of a young woman of color who’s not afraid to say it like it is and doesn’t worry about what people think about her.

TVLINE | And she breaks everything down on Instagram in the most relatable way, which is very helpful for a lot of young people.
It is next level what she’s doing, because I think a lot of politics is  they want you to be confused and they want you to not know what’s going on. I mean, she’s on Twitch, she’s doing Instagram Live, she’s like, “No, this does not have to be a mystery. I’m gonna break it down for you.” It’s so refreshing and just really inspiring. I think just any powerful women of color just breaking it down and making it simple and straightforward is really inspiring.

TVLINE | You’re playing a young woman of color in a position to help others. As you’re making this show and bringing joy, do you also think about what this character might mean to other people?
I haven’t thought about it in that way but I hope that people are inspired to see that, that she is in charge of the whole administration. And, yes, she might not have the experience but neither do a lot of straight white men and they seem to get there. So why not her? Why not me? Why not you? I think it is inspiring to just be like, you really can jump in before you’re ready because that’s what a lot of people have been doing for years. So I hope this has inspired you in that way.

TVLINE | What are some of the hard hitting L.A.-specific political topics you’re excited to explore this season?
Plastic straws, avocados… [Laughs] We’re really diving deep and we’re really getting to the bottom of weed dispensaries. Every single script is so hilarious and makes me giggle alone when I’m reading it so I hope that it does the same [for others]. It’s totally making fun of L.A., and there’s a lot of things to make fun of about L.A., but I think it’s doing it lovingly.

TVLINE | Is there a specific L.A. topic that you’re particularly passionate about, like the price of avocados?
I’m a huge fan of avocados. I do think they’re too expensive so any avocado royalty reading this, make avocados for all. [Laughs] That will be my platform.