As the Apple TV+ dramedy Dickinson enters Season 2, Emily Dickinson is growing up… and so is the show that bears her name.

“I’ve always felt like with this show, the stakes rise within every episode,” star Hailee Steinfeld tells TVLine. “And now with Season 2, there’s a whole new level of sophistication and elevation that we didn’t have in Season 1.” Dickinson still has its silly comedic touches this season, to be sure — Emily’s sister Lavinia has a hilarious arc with a new suitor — but the show ventures into darker and more adult territory as well, with Emily facing the daunting prospect of fame with the publication of her poems… while also losing the companionship of her best friend (and secret love) Sue.

“This season is actually kind of like a psychological thriller, as much as we could make Dickinson into that,” series creator and executive producer Alena Smith reveals, citing Patricia Highsmith works like The Talented Mr. Ripley as her inspiration. Season 2 (debuting this Friday, Jan. 8 on Apple TV+ with three episodes) is also about “what happens when a sensitive artist like Emily steps into the spotlight,” she hints, “and how she can become actually pretty disoriented there. There are these kind of blind spots and vulnerabilities for her that she didn’t have in Season 1.”

Emily is still penning fresh poems in Season 2, but she’s also faced with a life-changing choice, as Steinfeld puts it: staying “in her room, with her poetry, and with one reader, really, or opening up to the world about it.” The idea of publishing her poems and suddenly having all these prying eyes on her is a frightening one to Emily, and “there’s humor in her thinking maybe she can choose the amount of fame she wants, but then realizes it doesn’t work that way.” 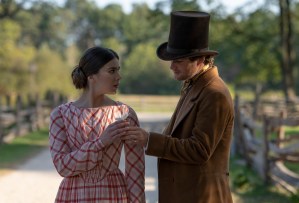 Helping guide Emily through this confusing path to fame is newspaper editor Sam Bowles, played by Iron Fist‘s Finn Jones. “He’s based on a real character in history who was an important person in Emily’s life,” Smith notes: “this progressive, young, ambitious editor of the Springfield Republican… who was a frequent guest at Sue and Austin’s salons.” Emily now “has this opportunity through Sam to be celebrated and to have the world read her poems,” Steinfeld teases. “But is it worth having to go through it all?”

Plus, Season 2 finds Emily losing touch with her closest confidante Sue, who’s undergone quite the transformation since she married Emily’s brother Austin. “She has gone from being this quiet orphan that always wears black to this glittering socialite in the most fabulous gold dress you’ve ever seen,” Smith hints, “and throwing huge parties [with] the who’s-who of New England coming through her doors… It raises some questions for Emily: ‘Where did my friend Sue go? Who is this new Sue, and what’s going on with her?'”

Sue is “definitely deflecting and sort of trying to mask what it is that she’s going through” as Season 2 opens, Steinfeld says. “And part of that is also by pushing Emily away.” That sends Emily into an emotional tailspin: What good is being famous if you lose the person you care about the most? “It’s heartbreaking and as messy as it’s ever been, their relationship,” Steinfeld adds. “I thought that after Season 1, it really couldn’t be more complex, and I was very wrong.”