If, on Wednesday night, you found yourself needing a distraction from the events unfolding in Washington, D.C., Fox had one to offer: celebrities dressed like various animals and food products, shaking their booties with abandon.

The Masked Dancer settled into its regular time slot on Wednesday, bringing with it five new contestants who tried to remain anonymous to the viewers at home. Before you drop your latest guesses in the comments, let’s recap who we met in Episode 2:

SLOTH | For most of Sloth’s clue package and performance, I was fairly certain he was Glee‘s Matthew Morrison: The word “Glee” showed up on a toothpaste tube; his choreography included the L-on-forehead “loser” symbol that appeared on many a Glee poster; and he played a doctor on Grey’s Anatomy, if that’s what the “D.R.” name tag in his package is supposed to suggest. Plus, even though his routine started out a little slow and goofy, it ramped up to some more intricate footwork in the second half, and it turns out Sloth can dance quite well!

But Sloth’s Word Up clue — “Broadway,” which would also apply to Morrison, and any number of his Glee castmates — seemed to feature a distinct accent, which Morrison doesn’t possess. Sloth could have just been trying to confuse us, but I’m going back to the drawing board on this guess — and there are still some other clues, like chemicals getting mixed in beakers and the number “13” on a red Solo cup, that don’t add up just yet.

In addition to clues like the periodic table of elements and a bag full of cash bills, Ice Cube’s package includes a pair of ballet slippers — and as Wikipedia has informed me, Nye holds a U.S. patent for pointe shoes! His Word Up hint (“’90s icon”), general lankiness and — with nothing but respect! — so-so dance ability (which he also showcased on Dancing With the Stars back in 2013) seem to seal the deal: It’s gotta be Nye, no? 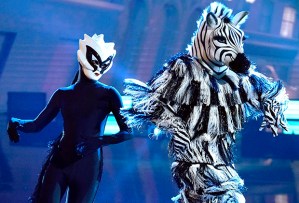 ZEBRA | Ample boy band references aside, Zebra seems to be an athlete — a race car driver, perhaps? — who has since pivoted to politics and/or a career in Hollywood. My initial guess? NASCAR competitor Ryan Newman, who has a partnership with Oscar Mayer (the hot dog costume clue!) and has received support from President Trump (“Now the president knows my name!”); he was also involved in an accident at the Daytona 500 last year, which could account for some of Zebra’s clues about “running on a low gas tank” or wanting to “shift back into a higher gear.”

On the other hand, none of the numbers in Zebra’s package — like the number “3” on a bronze-looking medal, or the number “11” — seem to immediately tie to Newman’s career, nor does he appear to have the political or showbiz aspirations that Zebra indicated. I’m feeling a bit lost on this one (and got no help from Zebra’s cha-cha, which was more like… wild thrashing?), but we’ve still got a Word Up clue — “comeback” — to help us out.

COTTON CANDY | Ooh, Cotton Candy is not here to mess around, friends. Girl can dance, as indicated not just by her stunning routine — which featured aerial acrobatics! — but also by her entrance to the stage, in which she and her posse did some perfectly synchronized leg pops.

Like judge Ashley Tisdale, I thought Cotton Candy might be Julianne Hough, but her Word Up Clue (“primetime”) didn’t sound much like Hough at all. Other clues we have to work with: a breakfast platter, a chalk drawing of a wizard hat, a clock with the letters L-I-F-E where 12, 9, 6 and 5 should be, and cupcakes decorated with lips and eyelashes.

MOTH | And finally, we’ve got Moth, who tells us she went from being relatively unknown to appearing in tabloids with the president. (Whether or not that’s President Trump isn’t made clear.) We’ve also got a box labeled “Clothes,” a photo of the Capitol building (yikes, the timing), math equations, and a painting of a nun with a halo over her head. And even though some of the clues quite obviously point to Monica Lewinsky — the scandal, her second act as a social activist — that seems a little too easy at this point, no?

At the end of the episode, Ice Cube is unmasked — and indeed, it’s Bill Nye! Wednesday’s episode has mostly left me feeling like World’s Lamest Detective, so I’ll take this victory (and share it with Ken Jeong).

OK, your turn! Who do you think Sloth, Zebra, Cotton Candy and Moth really are? And did you guess Nye’s identity correctly, too? Tell us below!