Having been recruited from another highly strategic and mentally tough reality show, one would think that the Big Brother players who have infiltrated The Challenge would be slightly less sloppy. And disappointing.

With the season’s limited amount of Gold Skulls waiting to be doled out, the players are itching to hit the elimination floor and punch their ticket to the final. But on Wednesday’s episode, two members from Team BB shake the house to its core, one by burning bridges and backstabbing his alliance, and the other by exhibiting an absolutely wretched social game. Read on for a recap.

Devin returns to the house feeling almost like a million bucks, telling the camera he likes to keep his friends close, and his enemies closer. And now, his biggest frenemy is his partner, by design. If Devin and Tori can learn to get along, they could become one of the season’s most formidable pairs.

Big T tells us her origin story, which includes losing her little brother and both of her parents at a very young age. She was “gifted” to her aunt, which is what brought her to the UK when she was just 4 years old. But leave it to Devin to segue a heartfelt conversation into absolute chaos. Seconds later, he’s firing shots at Amber M., asking her why she’s there. “She’s a snake,” he says. “I don’t want to hang out with her, I don’t want her around me, I want her to go to bed.”

“I just poured my heart out, and Devin’s having a go at Amber!” says Big T. “Devin is extra AF and I just don’t want to get involved.” He’s a pot-stirrer, that one.

CHALLENGE ACTIVATED | In “Drone Control,” players must navigate a series of lava tunnels with a drone to find a secret code. One player will use a VR headset to give his or her partner directions, while the other teammate will control the flight. A series of numbers must then be decoded and entered into a tablet. The team that gets it done the fastest will become the new Double Agents.

TJ then delivers news that Liv is not medically cleared to continue in the competition, so she’s out, making Mechie the season’s latest Rogue Agent. 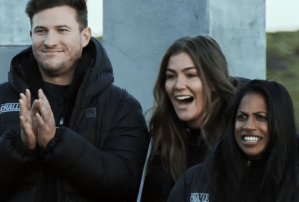 Every team but one either times out or crashes their drone, causing TJ to laugh at how badly everyone sucks. “The opposite of good is what you guys are,” he tells one team.

Devin and Tori are the only team to successfully complete the challenge. They celebrate for two seconds, before Devin says: “I still don’t like you,” which is, I guess, on brand for the smug Are You the One? vet.

DELIBERATION | Liv’s DQ leaves everyone with the same question: Is it going to be a guys or a girls elimination?

The Double Agents ween their choices down to Nany and Josh, and Nelson and Amber M. Tori wants to go in if it’s a Hall Brawl, but Devin immediately disagrees. This duo may have won, but they’re still the hottest mess in the game right now.

Tori asks Josh to sway the house toward Amber M., which he agrees to before stepping up to Jay and picking a fight. (I take it back: Josh wins the Forever Hot Mess Express award. Congratulations, Josh!) Josh tells Nany that he’s done with Jay, causing her to call his social game “messy.” Jay wants to have an adult conversation with him — a rarity for reality TV, especially of the MTV variety! — but Josh declines because his social game is utter trash.

When the house meets to deliberate, it seems nothing can save Nelson and Amber M., and they become the week’s Compromised Agents.

THE CRATER | As we knew from last week’s preview: It’s a Hall Brawl! Tori sees the hall and gets amped. If it’s a girls elimination, she wants in. 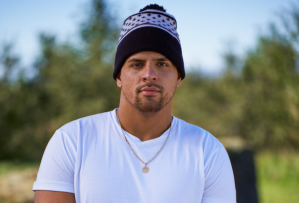 TJ calls Nelson and Amber M. down to the sand, then asks the Double Agents if they want to step up to the plate. Tori asks TJ for clarification as to who’s about to go in, but the host simply ain’t having it. “As an agent, you have to be ready for everything. You should also expect nothing.” Oookay. Devin promises he’ll get Tori her skull, telling her that “tonight’s not the night.”

Tori and Devin ultimately pass, voting Aneesa and Fessy down instead. TJ then reveals: It’s a guys night. (Editor’s Note: Nelson is about to get OWNED!)

Round 1 begins, and the collision is colossal! Fessy plays dirty as hell. He slams Nelson’s head and (from the looks of it) possibly tries to murder him? Nelson’s face mask flies off, and Fessy gets the point, but barely. Round 2 kicks off with a warning from TJ for Fessy to cut the s–t, but the Big Brother alum ultimately wins the Gold Skull… but loses the respect of a lot of his alliance members. It turns out Fessy asked Tori to throw him down, knowing his good friend was most likely going to be the house vote. Shady. After Nelson’s selfless act on Total Madness, it’s quite sad to see him go so early. He put up one heck of a fight.

Fessy now has a big decision. He can choose a new partner or stick with Aneesa; he winds up stealing his BB20 bestie, Kaycee. Leroy then chooses Aneesa, leaving Mechie to partner up with Amber M.

Thoughts on Fessy’s highly questionable moves? Excited about any of the newly shaken up duos? Drop some comments below!