At the movies, January is the traditional dumping ground for box office bombs that the studios are eager to bury and forget. Unfortunately, NBC’s new sitcom Mr. Mayor — debuting this Thursday, Jan. 7 at 8/7c; I’ve seen the first two episodes — feels like the TV equivalent of that. It’s a real shame, because the combination of Ted Danson in a starring role and Tina Fey behind the scenes should be an easy slam dunk. But instead, the whole endeavor feels half-hearted and half-baked, with a thin concept and a glaring lack of laughs.

It explains a lot that Mr. Mayor was originally conceived as a 30 Rock spinoff starring Alec Baldwin’s Jack Donaghy; as a result, the show plays like a rushed rewrite that doesn’t quite fit. (It acts like we should know who Danson’s retired business tycoon Neil Bremer is, even though we don’t.) To be sure, Danson has been a reliably charming TV presence for nearly forty years now, going back to his days tending bar as Sam Malone on Cheers. (His gleefully kooky turn on HBO’s Bored to Death deserves a second look, by the way.) But even he can’t rescue this. 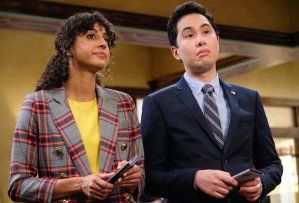 Danson’s Neil is the cheerfully unqualified new mayor of Los Angeles, who gets elected on a whim and soon learns that the job entails “90 percent photo ops and animal funerals.” (Oh, and Mr. Mayor quickly hand-waves away the whole global pandemic thing by saying that “Dolly Parton bought us all the vaccine.” OK, then!) The show itself seems as aimless and befuddled as Neil does, searching in vain for a strong narrative hook for us to care about. He’s the mayor, and… yep, that’s about all there is to it.

Of course, the premise wouldn’t matter as much if the show had laughs, but Mr. Mayor comes up short there as well. Fey and fellow 30 Rock/Kimmy Schmidt alum Robert Carlock serve as co-creators and executive producers, and Mr. Mayor delivers that same relentless pace of punchlines, with jokes coming fast and furious. Most, though, land with a thud, with lots of tired jabs at familiar targets (Los Angeles, millennials, social media) and few of them eliciting even a light chuckle. The tone is muddy, too, seemingly undecided between Veep‘s pitch-black cynicism and Parks and Recreation‘s earnest grassroots optimism — so it tries to do both, and neither feels genuine. (Plus, after the bruising election year we all just survived, do we even need any more political comedy at this point? Give us a year off, at least.) 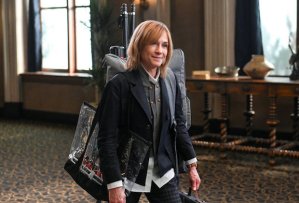 I’m tempted to give Mr. Mayor a break because it’s lined up such a strong cast — but really, that makes it even worse, because these actors deserve better. Holly Hunter co-stars as Arpi, a militant opponent of Neil’s on the L.A. city council (“What’s your beef with me?” “No beef. I’m vegan.”), and it’s hard to watch an actor as accomplished as Hunter tote around a binder for a political initiative known by the acronym “PPPORN.” Kyla Kenedy (as Neil’s stridently woke daughter Orly) and Vella Lovell (as chief of staff Mikaela) have proven to be talented performers, but they’re stranded here by the weak writing. Meanwhile, SNL alum Bobby Moynihan — playing clumsy sad sack Jayden, who’s saddled with prescription flip-flops — just feels like a stale rip-off of Parks and Rec punching bag Jerry.

By the second episode, Mr. Mayor is already resorting to bad toupee jokes and the aforementioned “PPPORN” debacle. (Really, no one at City Hall raised a red flag about that one?) Even a sure-fire winner like getting Ted Danson stoned on weed gummy bears somehow falls flat. (He ends up fighting a hockey mascot, for some reason.) The actors seem almost resigned here, too; maybe they know they’re attached to a lost cause. The one saving grace is the knowledge that everyone involved will go on to more worthwhile projects. The sooner this term ends, the better.

THE TVLINE BOTTOM LINE: Despite a fantastic pedigree and Ted Danson at the helm, Mr. Mayor falls flat with a thin concept and very few laughs.