Eli Moskowitz has undergone some rapid-fire shifts throughout Cobra Kai‘s three seasons, but can we really trust that the savage, spiky-haired bad boy can change his stripes?

Jacob Bertrand‘s shy and insecure Eli — better known as the ass-kicking baddie Hawk — took an even uglier turn in Season 3 after breaking former friend Demetri’s arm during a fight at the arcade. But that fractured bone sparked feelings of doubt and remorse, as Hawk began having second thoughts regarding his bad behavior and realized he had become the thing he hated most.

During the finale’s royal rumble at the LaRusso home, he joined his friend in taking down the Cobra Kai punks, and switching sides in the series-long rivalry. And even Bertrand admits he was a bit worried about the whiplash from Hawk’s abrupt back-and-forth shifting.

“I voiced that to the writers, like, ‘Guys, I don’t know if people are going to believe this,’ because of how horrible he is,” Bertrand tells TVLine. “I didn’t know if people were going to buy it like, ‘You know what? I just want to be good now!’ But honestly, after watching the season and seeing how it all played out, it definitely works.”

Before Eli’s rebirth into the badass warrior we now know, he was “a shell of himself,” says Bertrand. But the often bullied nerd turned a harsh corner when he started his karate training, which was only exacerbated when he found himself under Kreese’s wing. The Karate Kid villain found Hawk just as the young student was sharpening his skills and “needed something to buy into,” says Bertrand.

“Cobra Kai represented strength and being badass and everything he never was. When he starts learning karate and starts gaining the confidence to get the mohawk and flip the script, a lot of it goes to his head,” notes Bertrand. “He gets a lot of power all at once, and he doesn’t really know what to do with it. It’s almost inevitable that he becomes a bully and everything he hated. Under [Kreese’s] manipulation, it’s a lot easier for him to start doing a lot of bad s–t.” 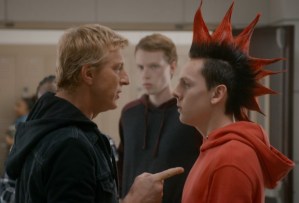 Speaking of that killer ‘do, it’s all Bertrand’s real hair, which gets buzzed and re-colored every season. “It takes about an hour to put up and it’s almost all hair spray, which is pretty nuts,” the actor reveals. “I take about a good hour-and-a-half to two hours in hair and makeup with the back tattoo and the lip and the mohawk.”

In addition, the actors handle about 90 percent of their own stunt work, adding heaps of realness to their rowdy fight scenes. “Our stunt coordinators, Hiro Koda and Jahnel Curfman, train us so that we can do as much as we’re able to. I’m always begging them to let me do more.”

Training to become Hawk starts with some boxing and muay thai, or Thai martial arts, which is followed by intense stretching and drill choreography as the season goes on. “We get in the dojo and train for a couple hours a day. Whenever we’re not filming, they ask us to train.”

The dojo’s newest additions, including uber-bully Kyler, push Hawk to remember the person he used to be, while also triggering many feelings he had since repressed. “Kyler coming back into Hawk’s life is sort of like a reminder of like, ‘Oh s–t, I used to be someone else.’ It brings back all of these insecurities he never really had a chance to conquer.

“I love all the chances I get to show Eli in Hawk,” Bertrand continues. “Hawk is just so loud and boisterous and super confident, so it’s cool to see that other side of him.” 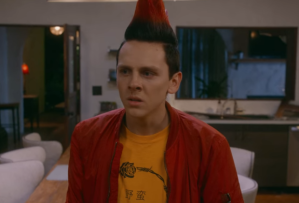 Adds executive producer and co-showrunner Josh Heald: “We wanted to take [Eli] on a journey of accidentally exploring his inner psyche. It starts to happen when Kyler shows up and Hawk is suddenly having inner feelings of, ‘Uh-oh, I’m the emperor with no clothes. He’s going to see right through me.’ You can see that he’s conflicted.”

But back to the question at hand: Can we really trust that Hawk’s loyalties will stay with the Eagle Fang/Miyagi-Do alliance come Season 4?

“Ultimately, there is a glimmer of hope,” says Heald. “He does switch sides and helps Demetri and apologizes. But that’s one moment. It does leave a little bit of uncertainty in the audience’s mind of, ‘Is that a full arc for Hawk?’ Well, this series has a lot more story left to tell.”

“I think yes,” Bertrand opines, “but it’s hard to drop something cold turkey, especially a crazy lifestyle choice like Hawk’s. There’s still going to be a bit of bad guy in him, but he realizes that his friends are more important than Kreese and the creed at Cobra Kai. He’ll be a good guy, but it might take him a little while to get there.”

He adds: “It definitely won’t be an easy transition, I know that.”