THE PERFORMANCE | From the moment we first saw Andoh strutting across the screen as the regal and forthright Lady Danbury in the Bridgerton premiere, it became abundantly clear that hers is a scene-stealing turn worth watching. Andoh further cements this notion with the commanding speech she delivers to a young Simon (Cairo Eusebe) in the series’ second episode. And she does so just before she makes it her life’s purpose to help him overcome his stutter and rise to greatness.

“When I was a girl, some centuries ago, I was afraid even of my own reflection. I entered a room and attempted to dissolve into the shadows. But there is only so long one in a position such as ours can hide,” Lady Danbury confides. “I knew I would have to step into the light someday and I could not very well be frightened. So, instead, I made myself frightening. I sharpened my wit, my wardrobe, and my eye, and I made myself the most terrifying creature in any room I entered.”

His late mother’s dearest friend asks only one thing of the future Duke of Hastings in return for her tutelage: “You must promise me that when you step into the light, you will be worthy of the attention you command.” And boy, does the adult Simon (the irresistible Rege-Jean Page) live up to that promise.

Because Lady Danbury rescues childhood Simon from the life of shame and obscurity his father imposed upon him for being less than perfect, Lady Danbury and Simon have an unshakeable mother-and-son-like bond that reverberates throughout episode two. In another impressive scene, Lady Danbury challenges the senior Lord Hastings (Richard Pepple) to be a better father. When the pompous fool responds with sexist insults and contempt, Lady Danbury doesn’t flinch but stands her ground. She raises her eyebrows but never her voice. Such rebuffing from his father makes Simon’s vengeful words against the patriarch on his deathbed all the more deserved.

Mischief is also part of Lady Danbury’s arsenal in “Shock and Delight,” as she persistently plots with Viscountess Bridgerton (Ruth Gemmell) to keep Daphne (Phoebe Dynevor) and Simon together. This comically includes distracting Anthony (Jonathan Bailey) so that Simon and Daphne can be alone and dropping unrelenting hints to the Duke that Daphne is his true love’s match. 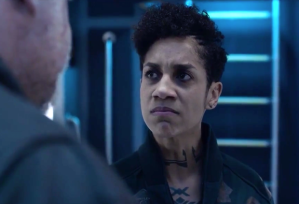 HONORABLE MENTION | The Expanse‘s Naomi has had much to process ever since her reunion with Filip turned into a mom-napping — and this week, as the sitch grew maddening, Dominique Tipper delivered gripping scenes. Realizing just how far Marco had turned Filip against his MIA mother, Naomi skulked the Pallas hallways… until Cyn tried to distract her with some maintenance work. She saw through her onetime colleague’s ploy, though, bellowing, “You let Marco poison your heart and Filip’s, and I will never forgive you for that!” When Cyn claimed that Marco was trying to build a new world, Tipper chilled us by shooting back, “He is building it on a river of blood. With your help!” Later — after being taunted with the fact that “there is only one way” she’ll leave the station, and following a derailed attack on Marco — Naomi took a wrench to Cyn’s head and grabbed his terminal to warn Holden of the sabotaged Roci. With her urgent cries, Tipper showed us that Naomi’s personal desperation would not override her duty.