The following recap, by the very definition of the word “recap,” contains spoilers for all of Bridgerton Season 1.

The title for the eighth and final episode of Bridgerton Season 1, “After the Rain,” could not be more apt. With the relationship between our favorite married lovebirds, Daphne and Simon, feeling oh so stormy, only a perfectly timed act of nature could wash away the sorrow.

The installment opens with Lady Whistledown declaring the near end of social season by noting a barely memorable noble couple’s shocking decision to court, marry and move away rather quickly. This is juxtaposed with the Duke and Duchess of Hastings sitting acrimoniously for a portrait painted by the secretly polyamorous Henry Granville. Simon and Daphne tersely discuss their plans for their upcoming ball while posing for the painting but don’t bother to touch or look at each other until Henry asks them to do so for the sake of the portrait. The couple does as they’re told and, for nearly a minute, Simon and Daphne realize they’re still in love. But the moment is fleeting, and as soon as Henry comments about the look of devotion in their eyes, Daphne and Simon quickly return to their despondence.

Over at the Bridgerton abode, Eloise presses Benedict for intel on Madame Delacroix because she thinks the dressmaker is none other than Lady Whistledown. Ben shoots down Eloise’s inquiries just in time for news that 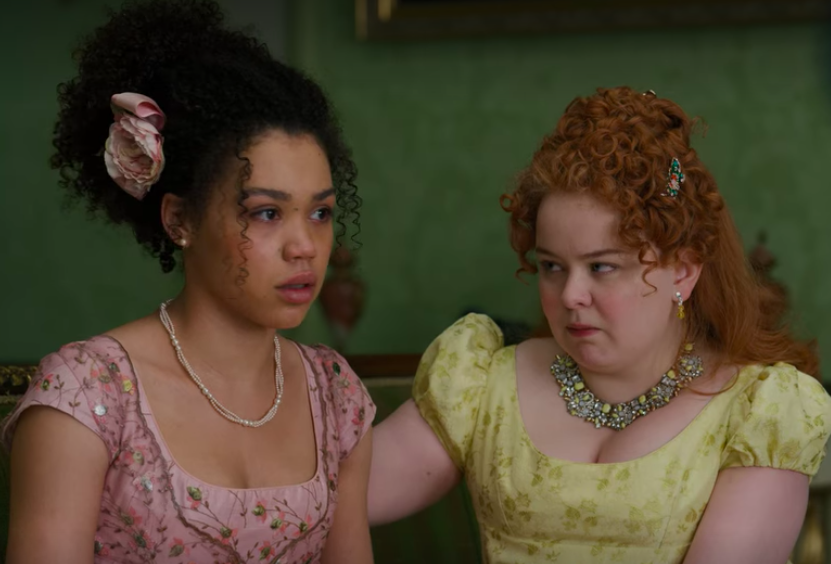 Francesca will be returning home from Bath. Who is Francesca, you might ask? She’s the third oldest Bridgerton sister that the writers presumably shipped off so that we could better focus on Daphne and Eloise. Shrug. Maybe Fran will have more to do in Season 2.

Later that day, Daphne and her mum, Viscountess Violet, shop for flowers. Daphne explains to Violet why she’s having a hard time forgiving Simon but is unable to discuss the issue further because Portia Featherington  interrupts their conversation to beg her way onto the invite list for the Hastings ball. Violet rebuffs Portia but Daphne is more merciful and agrees to forgive the Featheringtons so they can attend. Before Portia can celebrate, she learns that Phillip Crane is at her house to inform Marina that George, his brother and her boyfriend, died in battle. Marina tearfully tells Daphne she is sorry she ever doubted George’s love for her. But Phillip isn’t finished. He also offers to marry Marina but she turns him down because she doesn’t think she’s pregnant anymore.

Adding to the Featherington wildness, the family’s gambling degenerate of a patriarch decides to fix a boxing match and use his house as collateral. Simon’s friend Will helps clinch the fix and gets his cut. And while the Baron quickly collects and disperses his newfound riches, the bookies realize what he’s done and eventually take his life. The Featherington girls get new dresses for the Hastings ball but sadly come home to learn they are fatherless and penniless. That’s when Marina, who is still pregnant after all, decides to marry Phillip and get the heck away from her struggling cousins. 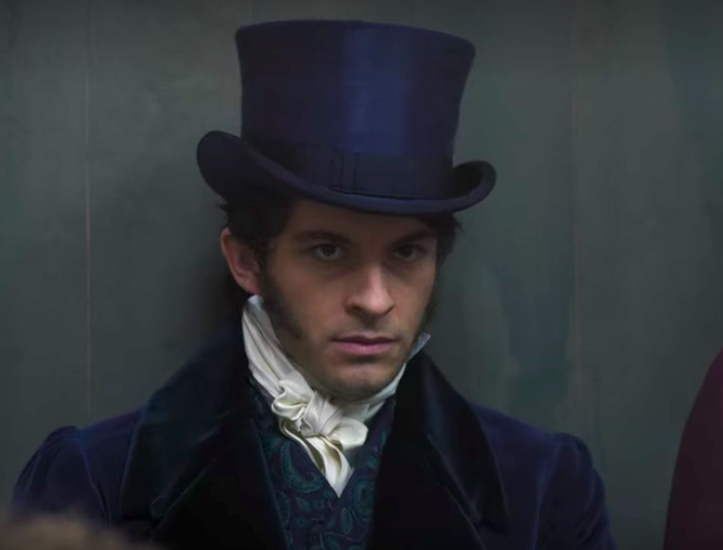 The boxing match is also significant because Simon chastises Will for taking a dive and Will tells Simon to focus on his own life and marriage. Burn! Meanwhile, Daphne finds Simon’s letters to his father and finally understands her husband’s grudge. And an ever-amorous Anthony and Siena hook up at the match beneath the stands and again at her home. Anthony gets so wrapped up in his post-coital bliss that he invites Siena to be his date at the Hastings ball. At first Siena agrees but later when Anthony comes to pick up Siena looking like a slightly paler Prince in Purple Rain, she’s back with her other boo. Having been heartbroken by Anthony before, Siena tells her pompous paramour to let her go because she has to protect herself from him and his well-heeled world.

The only relationship that really matters is that of Daphne and Simon. After a pleasant breakfast together, the pair go to welcome back Francesca at the Bridgerton home. While there, Simon charms Gregory and Hyacinth and gives Daphne hope that Simon does like children. We also hear Colin sing, cementing any and all comparisons to Kevin Jonas. At the Hastings ball, Simon confirms that he likes kids but still doesn’t want any of his own. Penelope attempts to tell Colin she loves him but before she can, he breaks her heart and tells her he’s off to travel and study. Eloise learns that the Queen (decked out in another impressive wig) plans to expose Lady Whistledown and runs to warn her, whoever she is. Well, turns out it’s Penelope (!!!) but Eloise doesn’t see her face. Although Julia Quinn doesn’t reveal Lady Whistledown’s identity until book four, the Netflix series moves markedly faster.

Back at the Hastings’ estate, Simon and Daphne dance for what they think is their final Waltz and fall deeply in love again. And the look of bliss captured on the spectating faces of Queen Charlotte and the Ladies Danbury and Bridgerton upon seeing Daphne and Simon’s renewed affections, is nothing short of perfection. It starts to rain and everyone clears the floor except the Bassets, who finally talk and understand each other. Lady Danbury blocks the dance floor with her cane and sends everyone home and Daphne tells Simon she found his letters to his father. The two reconnect — with and without their clothes — and decide to stay together. Flashforward at least nine months later, and a pregnant and happy Daphne gives birth to a son. Simon says the boy’s name will start with an “A,” to honor the Bridgerton tradition. Huzzah!