Perhaps you can guess a celebrity’s identity by hearing their unmodulated singing voice.. but can you name them by the flow of their body rolls?

Fox’s The Masked Dancer — a spinoff of the network’s popular competition series The Masked Singer — invites us to do just that, beginning with Sunday night’s premiere. (The Masked Dancer will settle in at its regular Wednesday time slot starting Jan. 6 at 8/7c). And if you’ve watched any of The Masked Singer‘s first four seasons, you know how this works: Costumed, anonymous celebrities take the stage for weekly performances (this time only with choreography), and the person with the least amount of votes at the end of each episode is eliminated and unmasked.

Before you review Sunday’s premiere and make your guesses about the masked celebs, let’s recap the season’s first five performers (aka Group A), and join me as I try to decipher each contestant’s clue package, with varying degrees of success. (See: probably very little success. Possibly none at all.)

HAMMERHEAD | Hammerhead’s most noticeable features are his super-muscular arms and legs, though I can’t quite tell if he’s really that ripped, or if that’s mostly his costume. As for his performance, it starts out a bit stiff, suggesting he’s not a pro dancer of any kind, though he does pull off a couple of impressive combinations with the backup dancers (who, much like on The Masked Singer, are absolutely carrying these performances. Unsung heroes, y’all).

His clue package makes special note of 1) a meal, which includes a burger, grated carrots and alphabet soup that spells the word “TALK,” along with 2) a surfboard with the letter “C” on it. Other clues: a mug labeled with the word “Joe” and a digital clock reading “6:05.” Meanwhile, as EP Craig Plestis previously teased, The Masked Dancer features the “Word Up” clue, in which each celeb says exactly one word with their regular, unmodulated speaking voice; Hammerhead’s is “dramatic,” and reader, I have not a single good guess for this one. 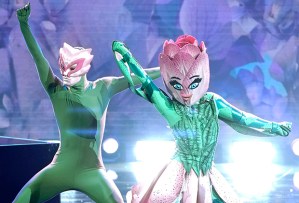 TULIP | The obvious guess for Tulip would be Stranger Things‘ Millie Bobby Brown: There are multiple “11”s popping up in her clue package, and she notes that people now appreciate the “stranger things” about her after getting bullied earlier in life. But her Word Up clue (“triple”) doesn’t reveal even a hint of Brown’s fantastic British accent, so those seem like red herrings.

The rest of Tulip’s package makes reference to TikTok quite a bit, as well as a bus ticket that reads “AL > DC” — and girl can dance! More specifically, she can tap! No easy feat, and certainly not something a complete amateur would attempt. My guess is TikTok star Haley Sharpe.

CRICKET | Even on screen, Cricket looks mighty tall when he makes his entrance, leading me to initially think he’s a basketball player; he’s got the swagger of an athlete, too. But there are three clues that indicate it could be Ian Ziering, a guess that judge Brian Austin Green makes, too: There’s a nod to Beverly Hills, 90210 (on which Ziering co-starred), Las Vegas (where Ziering briefly performed in the Chippendales revue) and The Apprentice (Ziering was a contestant on Season 7 of the celebrity version). I’m not totally sold on this one just yet — partially because the judges’ initial guesses are usually way off base, and partially because his Word Up clue (“accomplished”) reveals a voice that sounds a little older — but I’ll go with Ziering for now.

DISCO BALL | Disco Ball seems to be an older gentleman, given that his performance features very little actual dancing. It’s mostly a step-touch situation on that stage, but that’s cool! He still has a commanding presence, including a salute he gives in his clue package and at the end of his dance.

But what sticks out to me most is Disco Ball’s clue that he’s “not expendable” yet; I’m going to go with Expendables actor Dolph Lundgren, whose other movies seem to be hinted at in the clue package (like a bone with the letter “J” on it; Lundgren once co-starred in Johnny Mnemonic, a film where Ice-T plays the character J-Bone — sort of a stretch, but maybe not!). That said, I’m not sure how Disco Ball’s Word Up clue — “Grammy” — fits in.

EXOTIC BIRD | Easily the strongest performer of the night, Exotic Bird performs a Latin-inspired routine that’s straight fire, hitting all kinds of salsa, cha-cha and even hip-hop moves with precision. She’s clearly an athlete (very tall, too), and based on her basketball swish motion at the end of her clue package, I’m going with someone in the WNBA: For now, my guess is Lisa Leslie.

At the end of the premiere, Disco Ball is ousted first, and though the judges log some decent final guesses — LL Cool J, Smokey Robinson, Ving Rhames and Lionel Richie — he’s ultimately revealed to be Ice-T. (J-Bone himself! I should have known!)

OK, your turn! What did you think of The Masked Dancer‘s premiere? And who do you think Hammerhead, Tulip, Cricket and Exotic Bird really are? Vote in the poll below, then drop a comment!