Whilst writing a recap of Netflix’s Bridgerton, it is rather difficult not to assume the voice of Julie Andrews in one’s own mind. She is the voice of Lady Whistledown, after all. And although the true identity of the scandal sheet scribbler isn’t revealed until the eighth and final episode of Season 1, in many ways Andrews’ narration sets the tone for this high-end version of Gossip Girl.

The posh first installment, “Diamond of the First Water,” opens at the start of social season in Regency era London circa 1813. Two families are immediately introduced. There’s the very fetching Bridgerton clan with all eight of its beautiful daughters and handsome sons and their lovely widowed mother, Viscountess Violet Bridgerton (played by Ruth Gemmell). Her eldest daughter, Daphne (Phoebe Dynevor), is being served up, um, presented, for marriage. While her eldest son, Anthony (Jonathan Bailey), is shown getting his freak on with his soprano singing girlfriend, Siena (Sabrina Bartlett), on the side of a tree. Needless to say, this chap isn’t the marrying type. 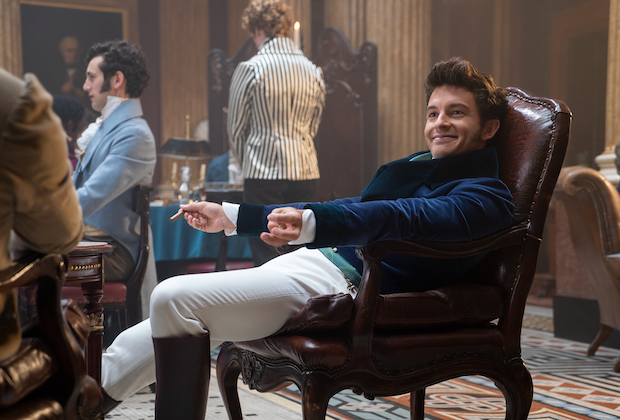 Anthony’s naked arse is exposed and it’s barely three minutes into the series. It’s shown again later when he and Siena go at it for a second time. Of course, later episodes are far steamier, but it’s safe to say that the pair’s outdoor romp serves as an early warning that this is not a family show.

The Featheringtons are the second family of note. There’s patriarch Baron Featherington (Ben Miller) and his demanding Baroness wife, Portia (Rome‘s Polly Walker), who is hellbent on marrying off their three daughters — Philipa (Harriet Cains), Prudence (Bessie Carter) and Penelope (Nicola Coughlan). Poor Prudence’s corset is tied so tightly that she faints in front of the Queen (Golda Rosheuvel). Things only get worse for the Featherington girls when their prettier and more mysterious cousin Marina (Ruby Barker) comes to stay with them and pulls in gangs of suitors. Sadly for Marina, a past dalliance with her old boyfriend seals her fate as a mother to be and increases the need for her to marry quickly to avoid social shame. 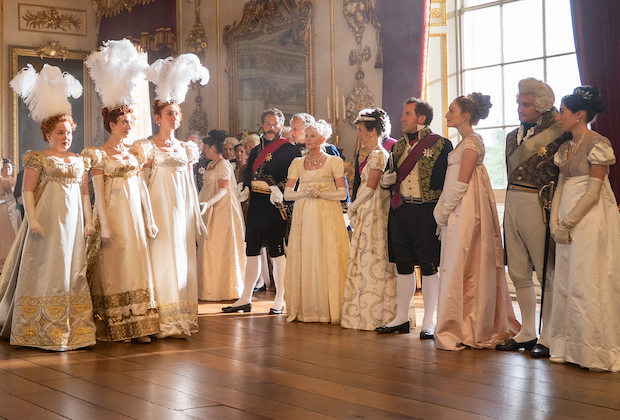 Daphne, whose breathtaking white dress, train and tiara make her look like she’s heading to her own wedding, fares much better at the royal court and Queen Charlotte declares her the season’s Incomparable. This turns out to be both a blessing and a curse after a rather judgmental and hypocritical Anthony scares away all of Daphne’s most eligible suitors. Things get so dire, in fact, that an older and lascivious Nigel Berbrooke (Jamie Beamish) remains as Daphne’s best and only option.

But not so fast. Anthony’s friend from college, Simon Basset (Rege-Jean Page), flirts with Daphne when she tries to get away from Berbrooke at Lady Danbury’s (Adjoa Andoh) ball. It is here that Daphne learns that Simon is the Duke of Hastings, but she is unimpressed by his title. There is an undeniable zing betwixt the two and both Daphne and Simon walk away wondering about the other. Although Chris Van Dusen created the show, which has been adapted from Julia Quinn’s wildly popular Bridgerton book series, Shonda Rhimes is an executive producer. So, fans of the prolific producer can expect much romantic chemistry between Daphne and Simon, and a lot of racial inclusiveness. The issue of race is tackled briefly in Episode 2 and in greater depth in Episode 4, presumably to shut down naysayers who might prefer the book’s white versions of Simon, Danbury, Marina and the Queen. Or maybe it won’t. Pish posh.

Back to the series premiere. Thanks to Whistledown’s scathing but separate observations of Daphne and Simon, and the writer’s public dare for a matchmaker to pair Simon with any of the ladies in waiting, Danbury and Viscountess Violet cook up a scheme to set up the youngsters. The plan kind of works too because it brings Simon and Daphne together again, this time at the Bridgerton dinner table with Simon and Daphne verbally one upping each other at every turn. Ooh! Peep that sexy chemistry!

By the time the two meet a third time, Simon runs to rescue Daphne from a handsy Nigel. But Daphne is quite able to handle herself and gives Nigel a two-piece and a biscuit with her satin-gloved fists. The first episode ends with Simon devising a dastardly plan where he and Daphne pretend to fall in love so that Whistledown and all the thirsty mothers of nobility will leave him alone and all the bachelors will desire Daphne more. The two co-conspirators walk hand in hand to the dancefloor and the fireworks in the background aren’t the only sparks partygoers get to watch with glee.

What did you think of Bridgerton‘s opening act?